These top privacy cryptocurrencies were designed to keep transactions private. Learn how they work and which one is most popular.

There are many reasons to keep your financial transactions private. Contrary to what some people believe, Bitcoin is not private. Luckily, there are a few cryptocurrencies that are dedicated to protecting your sensitive financial information.

The top 7 cryptocurrencies that you should consider are: Monero, Dash, ZCash, Verge, Komodo, Horizen and Bitcoin Private. These privacy-focused currencies use different methods to keep financial transactions private, giving users a wide variety of solutions.

Each method has benefits and downsides. Let's get into the details of each currency and the methods that they use to protect your privacy. 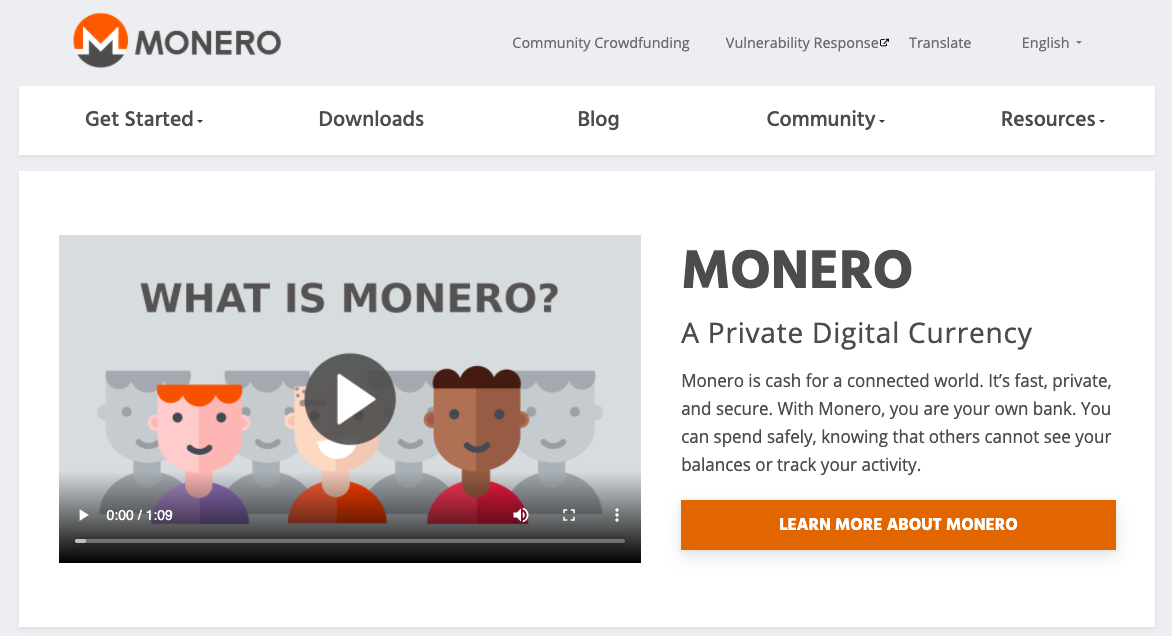 Monero was created as an offshoot of Bytecoin in 2014.

At the time of this writing, Monero is the most popular private cryptocurrency available.

It uses the RingCT (Ring Confidential Transactions) protocol to secure all payments. The protocol is quite complex if you don't know anything about cryptocurrencies.

So it helps to use Bitcoin as an example, because most people generally know how Bitcoin works.

In order to receive Bitcoin, you give someone your pubic wallet address. A Bitcoin address looks like this:

The Monero blockchain provides a similar wallet address that people can send money to. However, Monero does not send transactions directly to a wallet address.

Behind the scenes, it randomly mixes several different transactions together, so anyone who is looking cannot tell exactly where any one transaction came from and where it went. The transactions also do not go directly to your wallet address, but it goes to another hidden wallet address on the blockchain.

Only you have the ability to spend money from that hidden wallet.

However, if you want to show someone your transactions, you can give them a “secret view key” that allows them to see your wallet activity. It does not allow anyone with the key to create transactions, only view them.

So this gives wallet owners a small amount of transparency when needed, while maintaining a high level of security.

The biggest advantage of Monero is that it's fungible, or all units of Monero are equal.

Since other currencies like Bitcoin have public wallets, if a wallet is shown to have been involved in a crime, the funds in that wallet are now tainted and cannot be used for future transactions.

With private cryptocurrencies like Monero however, outsiders cannot tell where the funds came from, so they cannot be tainted.

That's a very high-level explanation of how it works, but it gives you the basic idea.

The only downside with private currencies like Monero is that you could be subject to surveillance for using them. Since the transactions are private, it could be used for illegal transactions and attract more attention from law enforcement.

Learn more about Monero here. To get a more detailed description of the privacy protocol, read this.

Dash is an abbreviation for “digital cash.” It's another cryptocurrency that has a privacy component, but it's not as private as Monero.

There are benefits to both public and private transactions.

Public transactions can be audited and provide transparency, when needed. This is useful if you have a public company or a nonprofit organization, where financials need to be published.

Private transactions keep your information safe and keeps people from digging into your private life.

With Dash, you can choose if your transaction is public, or private. Privacy is created by using the PrivateSend feature.

When you send a transaction in PrivateSend mode, it “mixes” your transaction with other transactions on the network, so it's almost impossible to figure out the source of each individual transaction.

Private transactions will cost a little more, but it makes sense, given the additional steps required.

Although Dash has the ability to send private transactions, it's not something that they openly advertise. Probably because this could be misconstrued as a way to do illegal transactions.

While it's certainly possible that criminals could use private currencies for illegal activities, it's also equally possible that honest people just don't want other people all up in their business.

So Dash provides a nice balance by allowing users to choose public or private transactions.

You can also purchase Dash via ATMs in different parts of the world. The fact that Dash is available at these ATMs alongside Bitcoin, Litecoin and Ethereum, is a great sign that there could be wider adoption of Dash as an everyday transaction cryptocurrency.

…and that's ultimately what will ensure the survival of a cryptocurrency.

It has to have a practical, real-world use.

You can read more about what makes a good cryptocurrency here.

ZCash uses a zero knowledge proof called zk-SNARKs (zero-knowledge succinct non-interactive arguments of knowledge). With this method, transactions are transmitted and stored on a public blockchain, while hiding the private details.

The project was launched in 2016 and is based on the work of researchers from MIT, Technion, Johns Hopkins, Tel Aviv University and UC Berkeley.

SEE ALSO: This one thing is your secret trading weapon

According to their website, as of May 2020, over 39,000 retailers currently accept ZCash.

You can find a list of exchanges to purchase ZCash here. 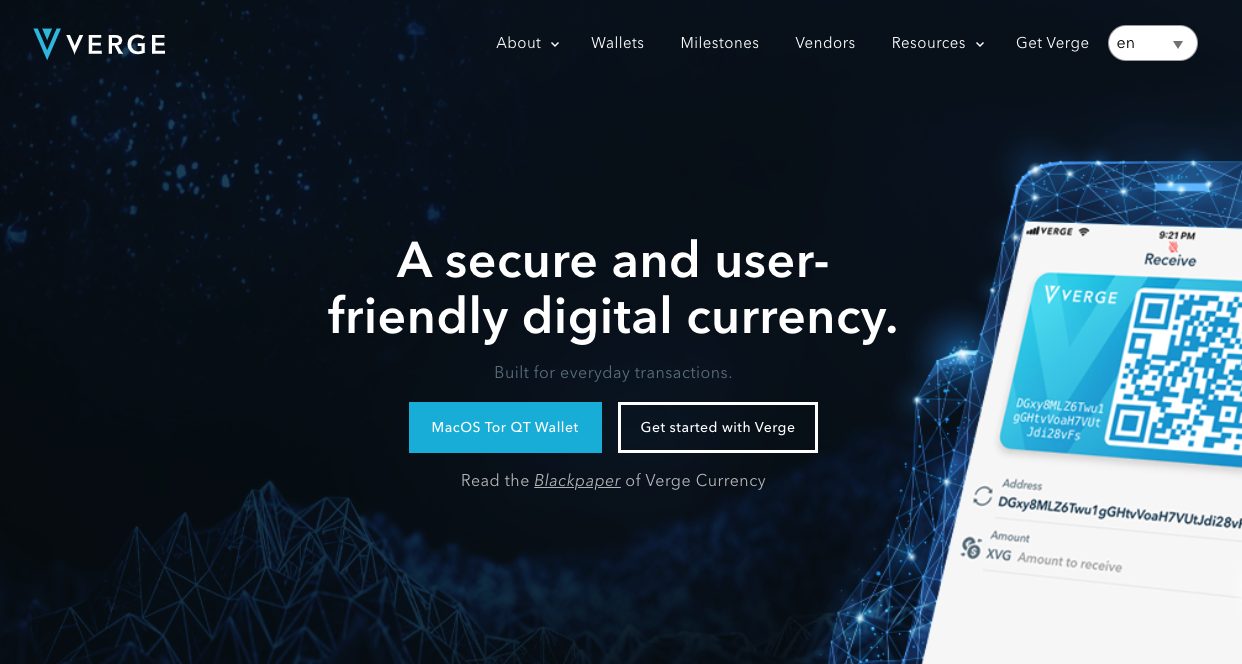 Verge Currency was originally called DogeCoinDark, and was first launched in 2014.

It's a 100% open source project, so anyone can go in and review the source code to see how it works. This might seem like a bad thing, but having an open source project is essential to creating the most secure private currency possible.

There are 2 primary benefits of a project being open source:

Most of the cryptocurrencies on this list are open source projects.

Unlike many of the other cryptocurrencies on this list, Horizen seeks to be more than just a digital currency. They are building an ecosystem that can not only host financial transactions, but can also host distributed applications (dApps) and other technologies.

Their websites says that their blockchain solution is more scalable than other projects, which can dramatically speed up transaction times and capacity.

PIVX used the Zerocoin protocol to secure transactions. But as they say here, they are now transitioning to a new solution.

By the looks of it, they will implement zk-SNARKs, just like many of the other private cryptocurrencies on this list.

That's a good sign. However, based on this, I would say that this project is not fully developed yet.

So while this project is worth watching, you probably shouldn't put any money into it yet.

Perhaps the biggest criticism of Bitcoin is that it's not private.

Although Bitcoin accounts don't have names and addresses attached to them, every wallet can be publicly tracked.

Some tracking software can also track the IP of the computers used to do these transactions.

It's a hard fork of Bitcoin, meaning that a group of developers wanted to improve on the design of Bitcoin, so they used the programming code of Bitcoin as a starting point, then they made their own modifications. This is perfectly acceptable in the the world of cryptocurrencies and promotes evolution to improved iterations of a technology.

The technology that was used to make Bitcoin Private secure was taken from the ZClassic cryptocurrency.

So BTCP is a combination of the technology from Bitcoin and ZClassic.

In addition to privacy, BTCP also says that they have faster transaction speeds, compared to BTC.

We haven't seen any BTCP ATMs or websites that accept it yet, so only time will tell if it will become as popular as Bitcoin.

As with all things, you should do your own research and find the private cryptocurrency that works best for you and your situation.

Your privacy needs will be different from others, so the ideal private cryptocurrency for you might be different than for others.

However, there's currently one very clear leader in the private cryptocurrency space, and that is Monero.

As of the initial writing of this article, Monero is the best performing private cryptocurrency on the market.

Like with all private cryptocurrencies, the potential downside of Monero is that it can be seen as a type of money that's only used for illegal activities.

That said, if you want the most private cryptocurrency, it's probably Monero.

At least at the time that this was written.

However, if you want flexibility, then Dash is probably your best bet. The fact that you can get it at ATMs along with established cryptocurrencies like Bitcoin and Ethereum, makes it a great candidate for wider adoption.

But regardless of what you feel is best, always do your research before investing time and money in a private cryptocurrency. Make sure that you are comfortable with the security of the technology and the team behind the project.

Just like with picking trading strategies, there isn't a one-size-fits-all solution.