Learn 7 proven ways to trail your stop loss to capture more profit. Also find out about the advantages and disadvantages of trailing a stop.

Traders use a trailing stop loss to take advantage of trends and maximize their profit per trade.

In reality, nobody knows exactly when a trend will end.

Therefore, if you set take profit price, you'll lose out on a lot of profit if price keeps moving in the direction you expected.

A trailing stop loss will allow you to flow with the market and ride big moves.

Before I get into the actual methods, let's first look at the advantages and disadvantages of using trailing stop losses.

The biggest advantage of using a trailing stop loss is that it gives you a systematic way of letting your profits run.

This has a huge psychological benefit.

If you don't have a plan, there can be the tendency to doubt yourself and feel like you missed out on profits.

In other words, you'll have FOMO, or the fear of missing out.

But when you have a tested plan, you know what to expect.

So even though one trade did not work out as well as you wanted, you know that over the course of many trades you'll make more money than if you didn't use the trailing stop.

Using a trailing stop loss is not a guarantee that you'll make more money.

So you'll have to test a trailing stop with your entry, to see if it's a good fit.

A potential downside with trailing stops is that you'll give up some profits because you're exiting when price retraces.

This can be tough for some traders to handle on a psychological level.

Ask yourself if you don't mind giving up some short-term profit, in exchange for potentially gaining more profit on big moves.

Another disadvantage is that you might find that you break even more often.

There is always going to be a trade off between capturing more profit and having a higher win rate.

If you're the type of person who likes to have a high win rate, then trailing stops might not be for you.

However, you prefer to maximize your overall return and you don't mind a lower win rate, then you should totally look at using a trailing stop.

Now that you know the benefits and downsides, let's get into the proven methods that you can use.

1. Close Beyond a Moving Average

A close on the other side of a moving average is one of the easiest ways to trail your stop loss.

It's easy to spot a close beyond a moving average, so there's no room for overthinking or interpretation.

For example, let's say that you went short at the arrow on this chart.

But by using a moving average as your trailing stop loss, you would have been able to capture more profits by waiting for a close above the moving average, as shown above.

Obviously, there are different types of moving averages and different settings.

If you don't know where to start, then you can test out these 3 settings and see how they work for you.

Backtest the different moving average settings and see which one is the most profitable.

Then don't be afraid to test out your own settings, based on your observations.

Another trailing stop method that's not widely talked about, but can be very effective, is the risk multiple trailing stop.

For example, let's say that you had a 100 pip stop loss when you entered your trade.

This is the risk multiple, otherwise known as the R multiple.

So when price hits 100 pips in profit, you might want to trail your stop loss to breakeven.

That's a good place to start, but you can also experiment with using different risk multiples to move your stop loss.

You might move your stop to breakeven when price hits 2R.

…or you might want to start trailing your stop loss by 1R as soon as price hits 3R.

There are many possibilities for you to experiment with.

To take the work out of trailing your stop loss by R, our Trailing Stop EA for MetaTrader makes it easy.

It automatically sets up the trailings stop as soon as you enter a trade.

The best part about this method is that it automatically takes market volatility into account.

Then you can ride out volatile spikes more easily.

When the market is quiet, the stop loss will be smaller and price has to move less to hit your R levels and start locking in profits. 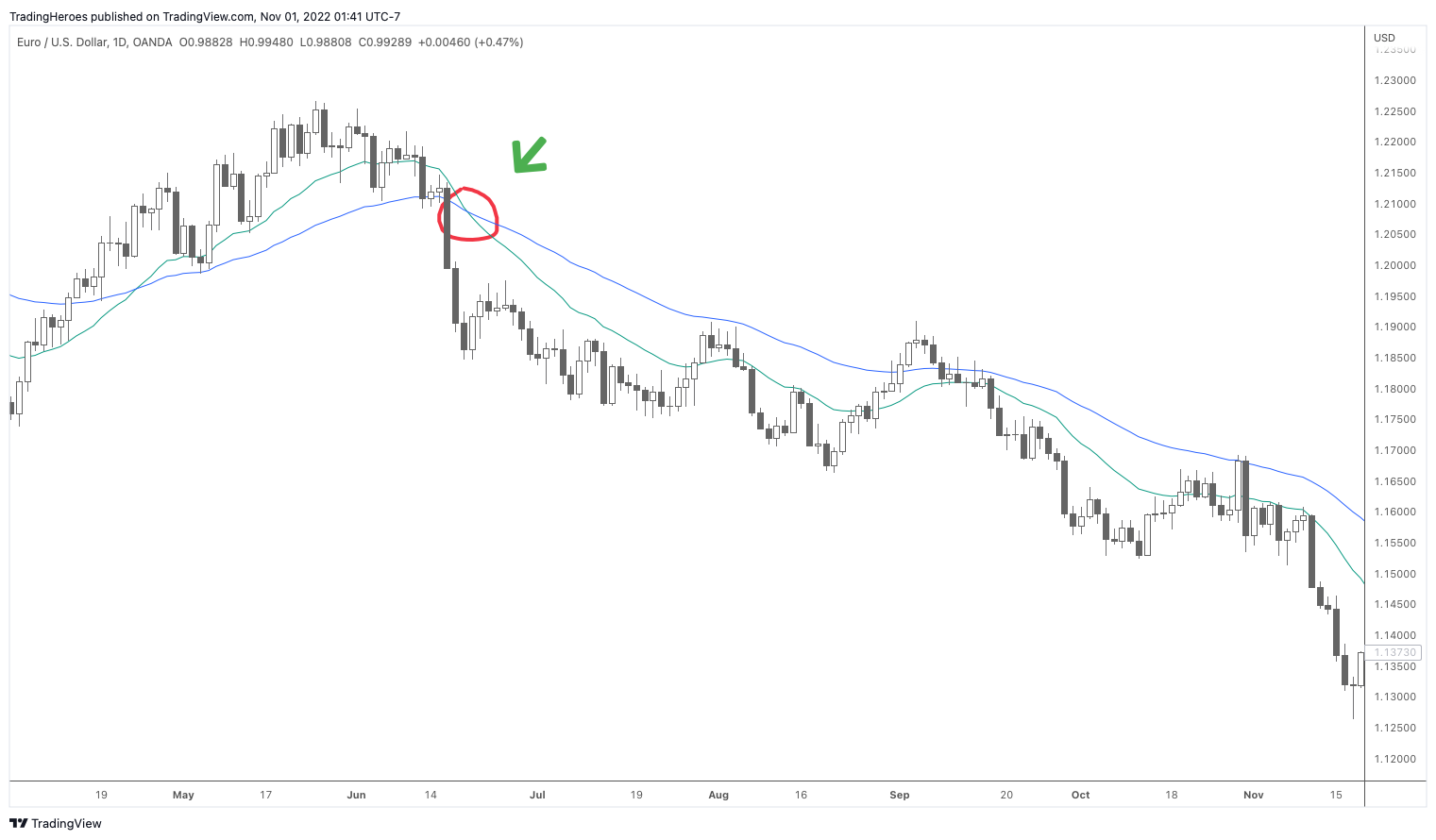 When moving averages cross, that can be a good indication that a trend is coming to an end.

This is usually used to trade stock market indexes, but it can also be used in other markets.

The best part about this trailing stop method is that it's very exact.

It's obvious when the moving averages cross.

There's no analysis or discretion involved.

As soon as you have a closing candle with a crossover, you exit the trade.

Support and resistance levels can be great ways to trail your stop.

These levels take into account the current volatility of the markets and are usually easy to spot.

Here's an example of how trail your stop loss in this downtrend in the EURUSD. 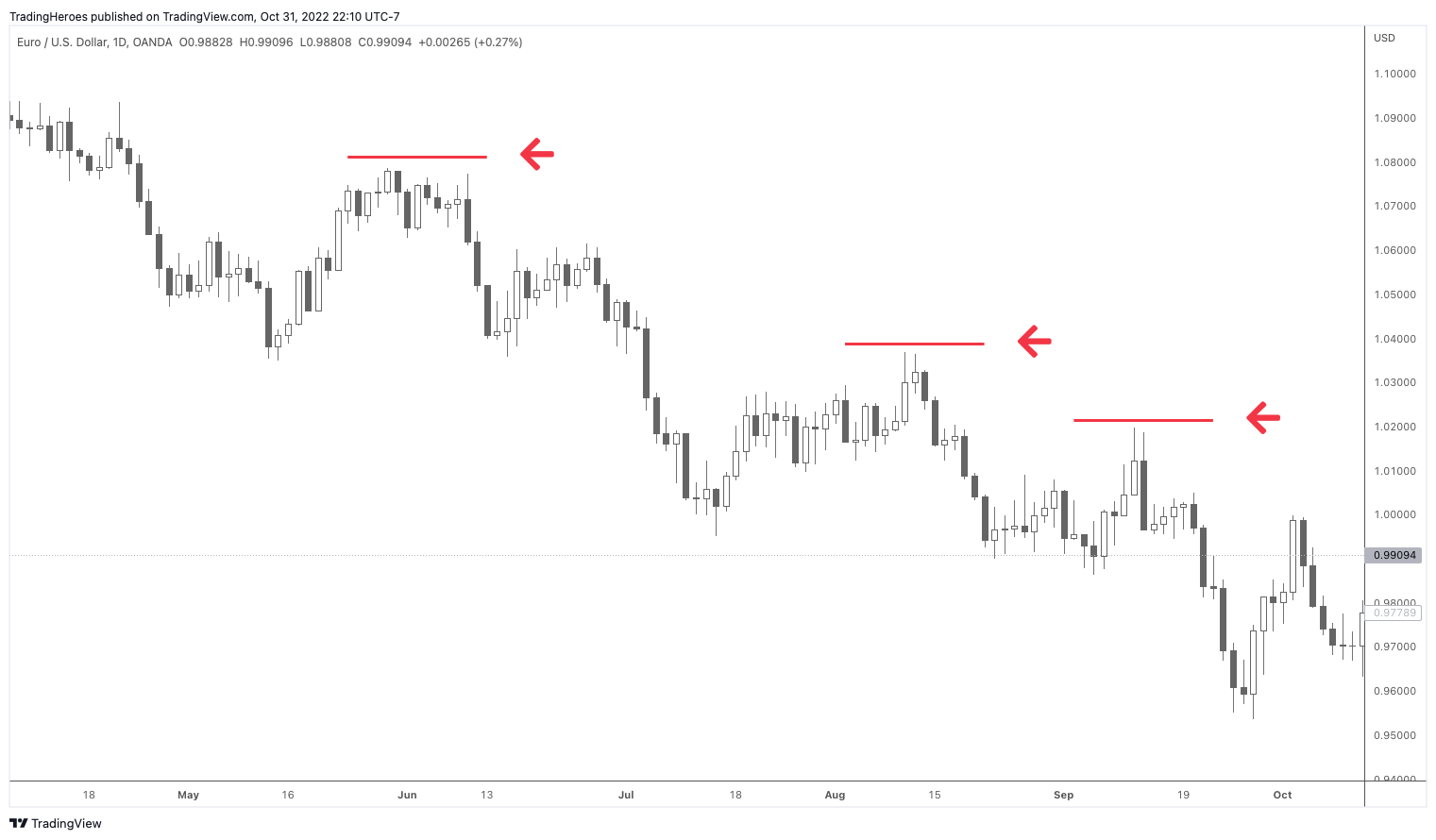 The only real downside to using this method is that there is some discretion involved when drawing support and resistance levels.

You have to be patient and let the support levels develop, or you can move your stop loss too early and get stopped out prematurely.

To prevent this, look for a strong move away from a level before moving your stop loss.

If you prefer indicators, the PSAR is another easy way to trail your stop loss.

This indicator provides clear levels to set your stop loss on every candle.

In the chart below, the PSAR dots are the levels where you would place your trailing stop loss.

Traders will usually trail their stop loss by 2 or 3 previous levels so they can ride the trend. 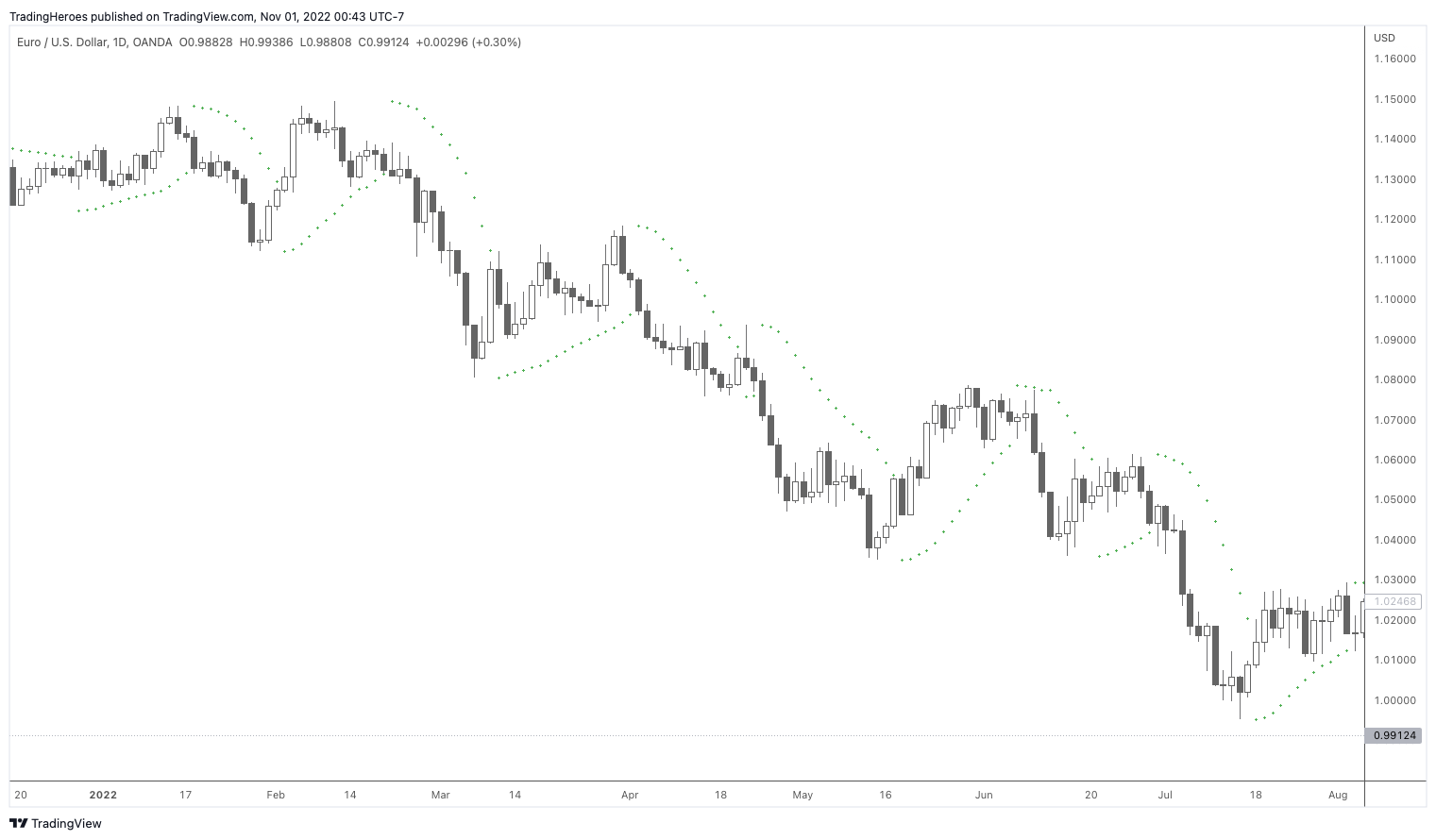 On the downside, the PSAR may not capture a long term trend because it tends to be a little more sensitive than other trailing stop loss methods.

In order to compensate for this, you can make the settings less sensitive, or use the indicator on a higher timeframe.

For example, you might be trading on the 4 hour chart, but you could use the PSAR on the daily chart to trail your stop loss.

This method trails your stop loss fairly tightly, so it's great for markets that tend to have strong breakouts, but price snaps back quickly.

Here's how it works…

Once your trade is in profit, trail your stop loss in the following way:

Move your stop loss with every new candle that prints.

As you can see, your stop loss moves with price, which allows you to take advantage of big candles.

But as soon as price starts consolidating or retracing, you are stopped out and you take your profits off the table.

Here's an example of a short trade. 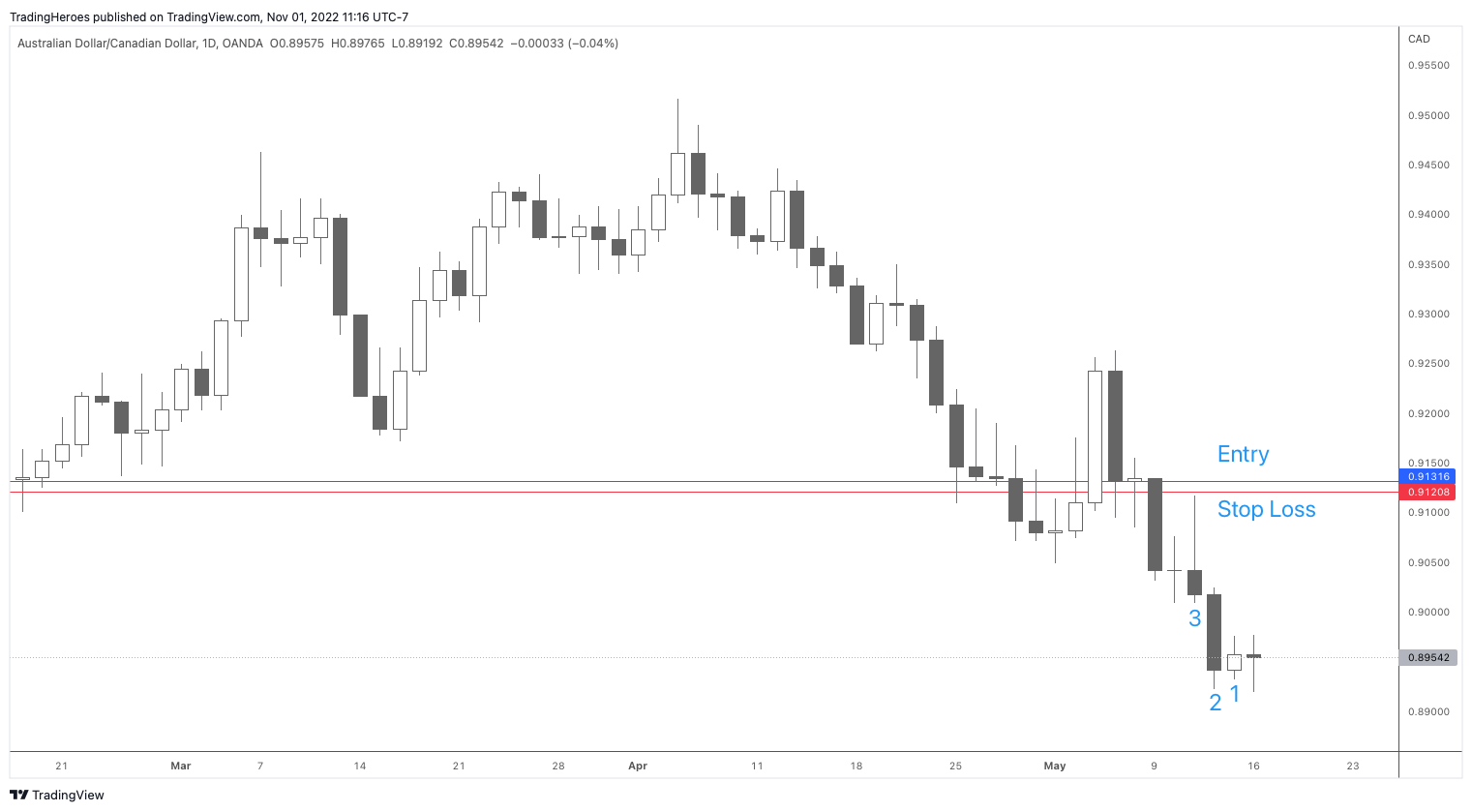 This short trade is in profit, so it's time to start trailing the stop loss.

At the current candle, you count 3 candles back.

Then place the stop loss above the 3rd candle.

As each new candle closes, the 3rd candle also moves forward and you move your stop loss accordingly.

The final method that I want to share with you in this tutorial is to exit a trade after price has retraced by a certain percentage of the high or low of the move.

This method is a little different from the others above, in that you're using the last extreme move.

So let's say that you determine that when price retraces 12%, that's a good time to exit the trade.

If you used a percent retracement trailing stop, you would have exited just before price moved lower to 70. 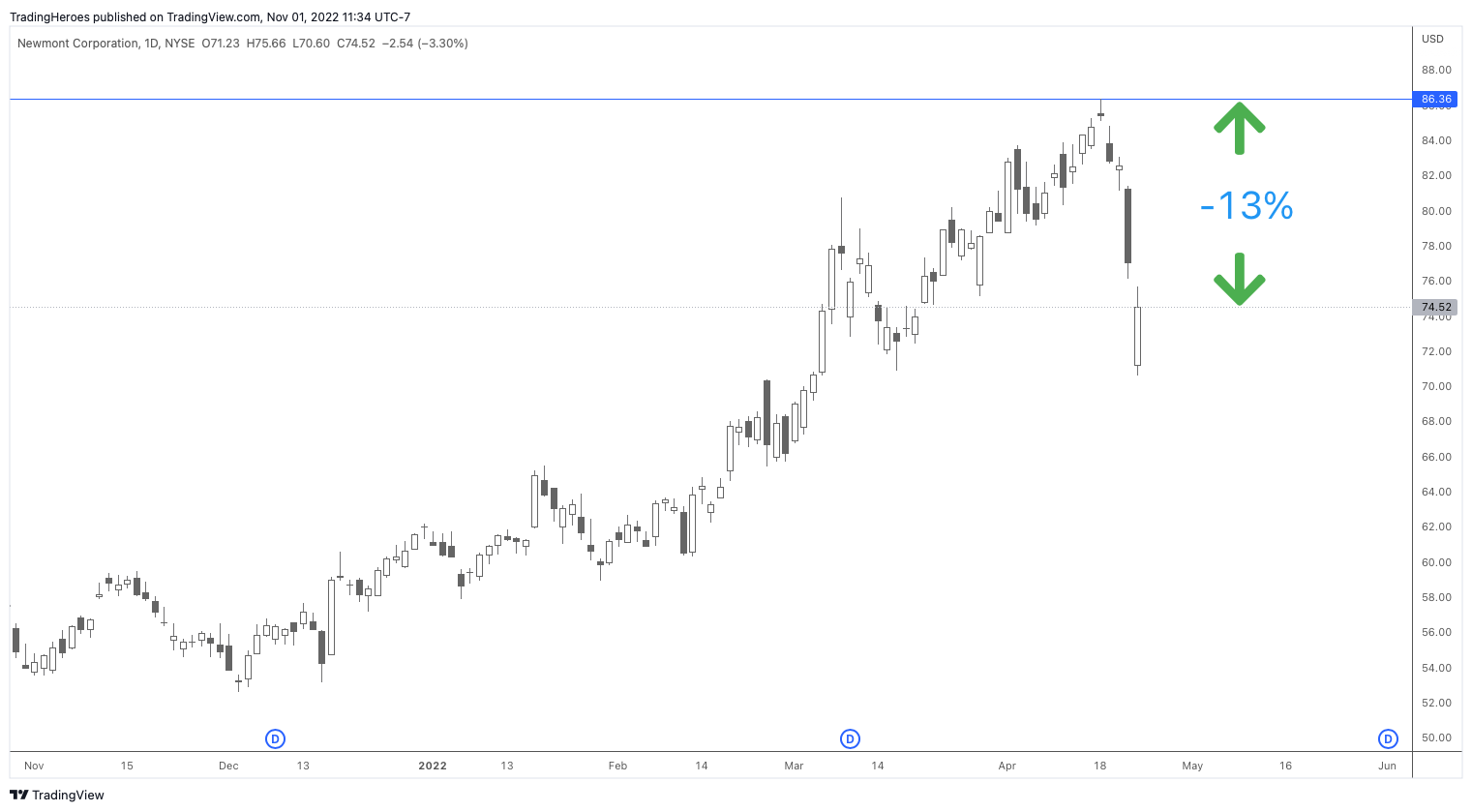 In order figure out the best retracement setting to use, be sure to do extensive backtesting in the market that you're trading.

This method is usually used in the stock market, but test it out in the market you trade.

Remember that every market has its own personality, just like us humans.

So each individual market and even each currency pair or stock might need to use a different retracement setting.

Trailing Stops You Shouldn't Use

Knowing which trailing stop methods to avoid is just as important as knowing which ones to use.

There are 2 common trailing stop loss methods that you should avoid.

The first method that is sometimes taught online is to trail the stop loss by a fixed point value.

So let's say that you set a trailing stop value of 25 pips.

Every time price moves 25 pips, you move your stop loss 25 pips to lock in your profits.

This sounds great in theory and it's easy to implement.

However, it does not take into account the volatility in the market you're trading.

But if you trade a more volatile pair like the GBPJPY, then 25 pips will probably be too small and you'll get stopped out a lot.

The bottom line is to avoid using a fixed value trailing stop.

Some trading platforms, especially Forex platforms, have a built-in trailing stop feature and some new traders might be tempted to use it.

This is actually one of the worst ways to trail a stop loss.

The trailing stop loss on trading platforms usually trails your stop loss by fixed point value and trails it on every tick.

As I demonstrated above, using a fixed point value by itself is not useful because it does not take into account the current volatility of the market.

But using a tick-by-tick trailing stop is even worse.

When you use this type of trailing stop, the stop loss starts trailing as soon as the trade moves in a positive direction.

Even if the trade isn't profitable yet.

But the reality is that this type of trailing stop “strangles” the trade too quickly and you'll usually find yourself getting stopped out at a small loss, or having just a small profit and missing out on a big move.

So avoid this type of trailing stop loss and test out the methods on the list above.

Which Trailing Stop Strategy is Best?

In reality, there's no one best trailing stop loss strategy for everyone.

Your trailing stop method has to be a good fit with your entry and your trading personality.

Knowing these stats will give you a baseline to compare with your strategy with a trailing stop.

Assuming your test is profitable, then test different trailing stop methods with your entry.

The data will tell you which trailing stop method is best to use.

So there are 7 trailing stop loss methods that can increase your average profit per trade by letting your winners run.

Sometimes the improvement in your return can be dramatic when you add a trailing stop.

But like with all things in trading, be sure to test your trailing stop method extensively before you risk real money.

The strategy you use has to match your entry and your trading personality.

Try a few different trailing exits, get some stats and pick the one that works best for you.

Also explore other trailing stop methods not mentioned in this tutorial.