Do Brokers Hunt Your Stop Losses? No, But Here’s Who Does

Your broker doesn't run your stop losses. But these traders do. Find out who they are and how you can prevent yourself from being stopped out unnecessarily.

Home / Forex Brokers / Do Brokers Hunt Your Stop Losses? No, But Here’s Who Does

Someone is hunting your stops.

But it's probably not who you think.

Let's first take a look at why brokers don't hunt stop losses. Then I'll get into who does and how to avoid it.

This is true for regulated brokers in major financial countries.

The only traders who complain about broker stop hunting are rookie traders who don't have a proven trading strategy, and/or are using a shady broker.

If you are using a super dodgy unregulated broker from a suspicious country, then you might see some abnormal price movements. When you see that, it's time to get a real broker. Find out who we recommend here.

But legitimate, regulated brokers could really care less about your stop losses. In fact, they make more commissions if you hang around. So there's no motivation for them to take out your stops and blow out your account.

Even if they are a market maker broker, they are not “trading against you.” They're simply providing liquidity for their customers.

…and since over 90% of traders lose money on their own, market makers don't have to hunt stop losses. The odds are hugely in their favor already.

If you are really concerned about your broker trading against you, then use an ECN broker. 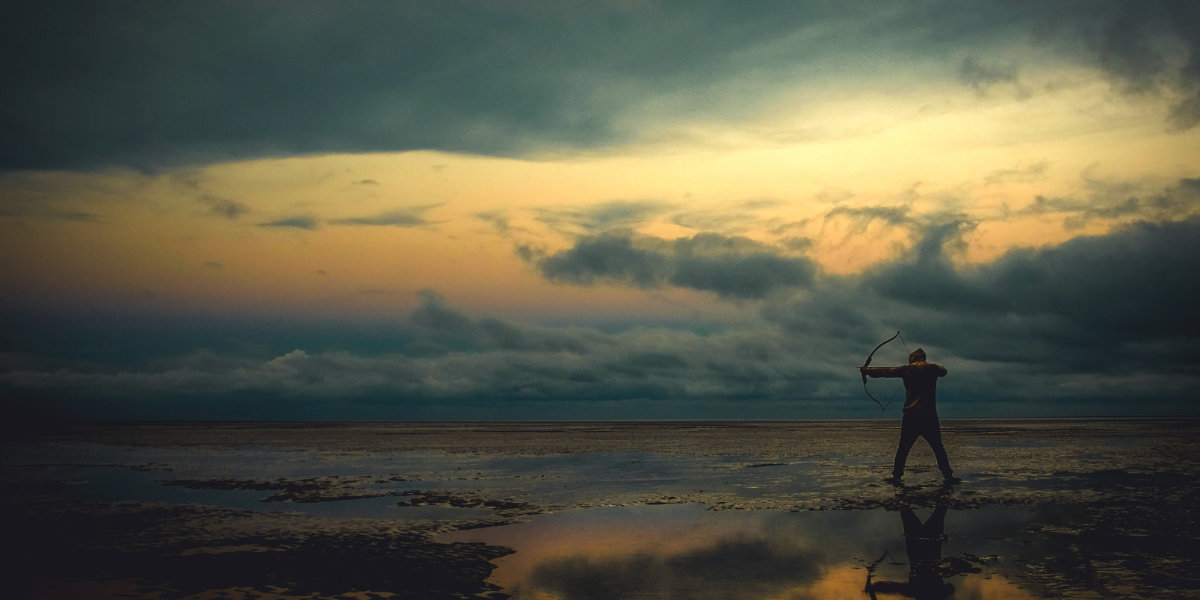 The real stop hunters are the large institutions.

Banks, hedge funds and other institutions have the capital to temporarily push the market past key levels. Large institutional traders cannot enter their trades all at once…like retail traders can.

When a large order enters the market, it moves the market in the opposite direction of the trade. This is because there are no more traders to take that trade, at that price. Therefore, the trader with the large order has to pay more to get the trade done.

It's a liquidity issue. There isn't enough liquidity to absorb a big trade.

In order to avoid this, large traders break up their trade into much smaller pieces. On top of that, they can also push the market in the opposite direction, in order to take out some stops and clear out liquidity in their desired trade direction. 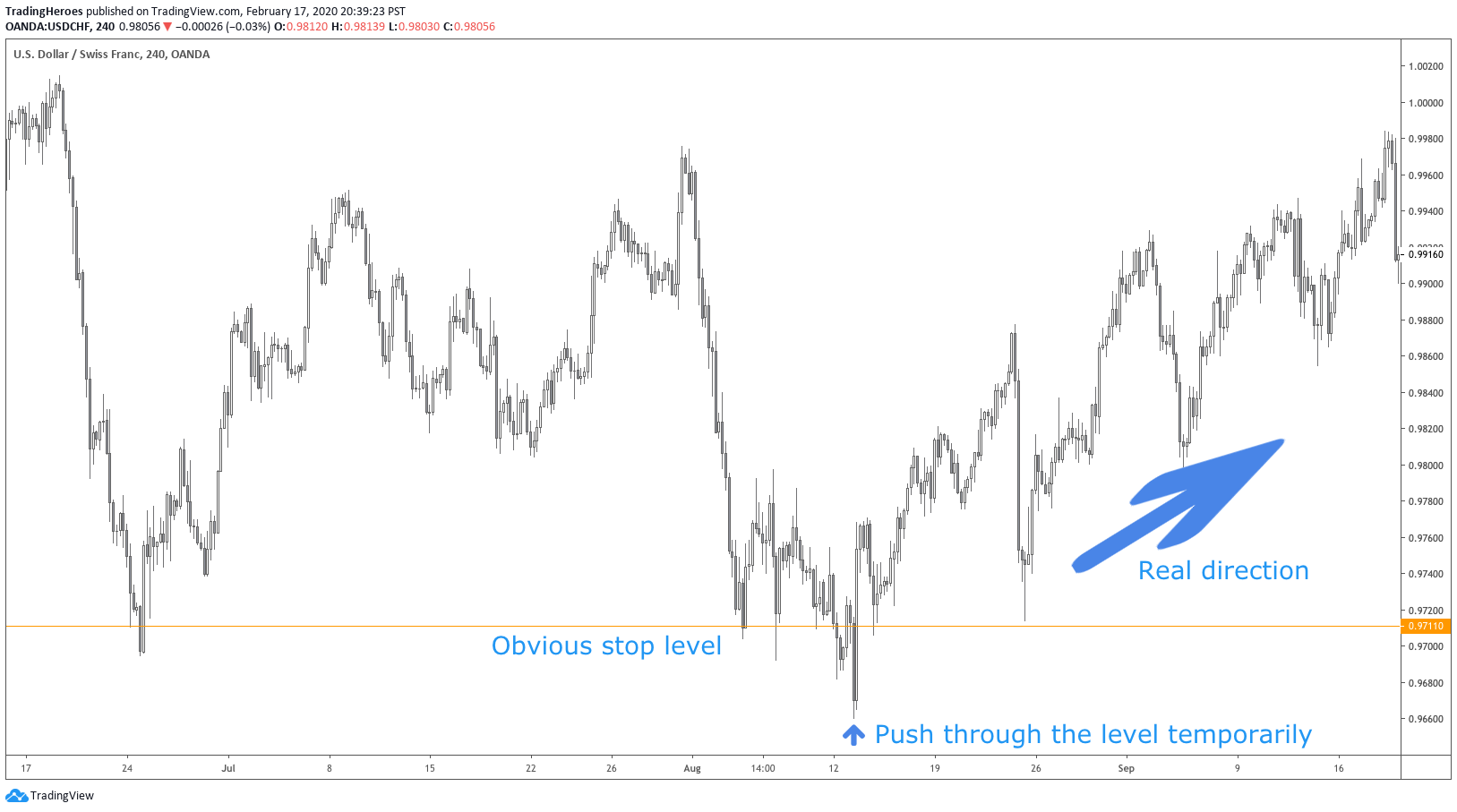 It's kind of like what Paul Rotter would do in the bond market. He would enter a large pending order in one direction and when traders tried to ride that trade, he quickly cancelled the order and entered a trade in the opposite direction.

How to Avoid Stop Hunting

Can you completely avoid stop hunting? Of course not, but there are a few things that you can do to minimize its negative effects.

Only enter a trade when you see price react in a way that's in line with what you think the market will do. The bottom line is that you will never know if a support or resistance level will hold because in reality, it's more of a fuzzy zone.

So wait until the market “tips its hand” and gives you a clue as to what it will do next.

One type of confirmation is a consolidation below a support level.

Once it pops above that level, this can be a good confirmation that price might start to reverse. 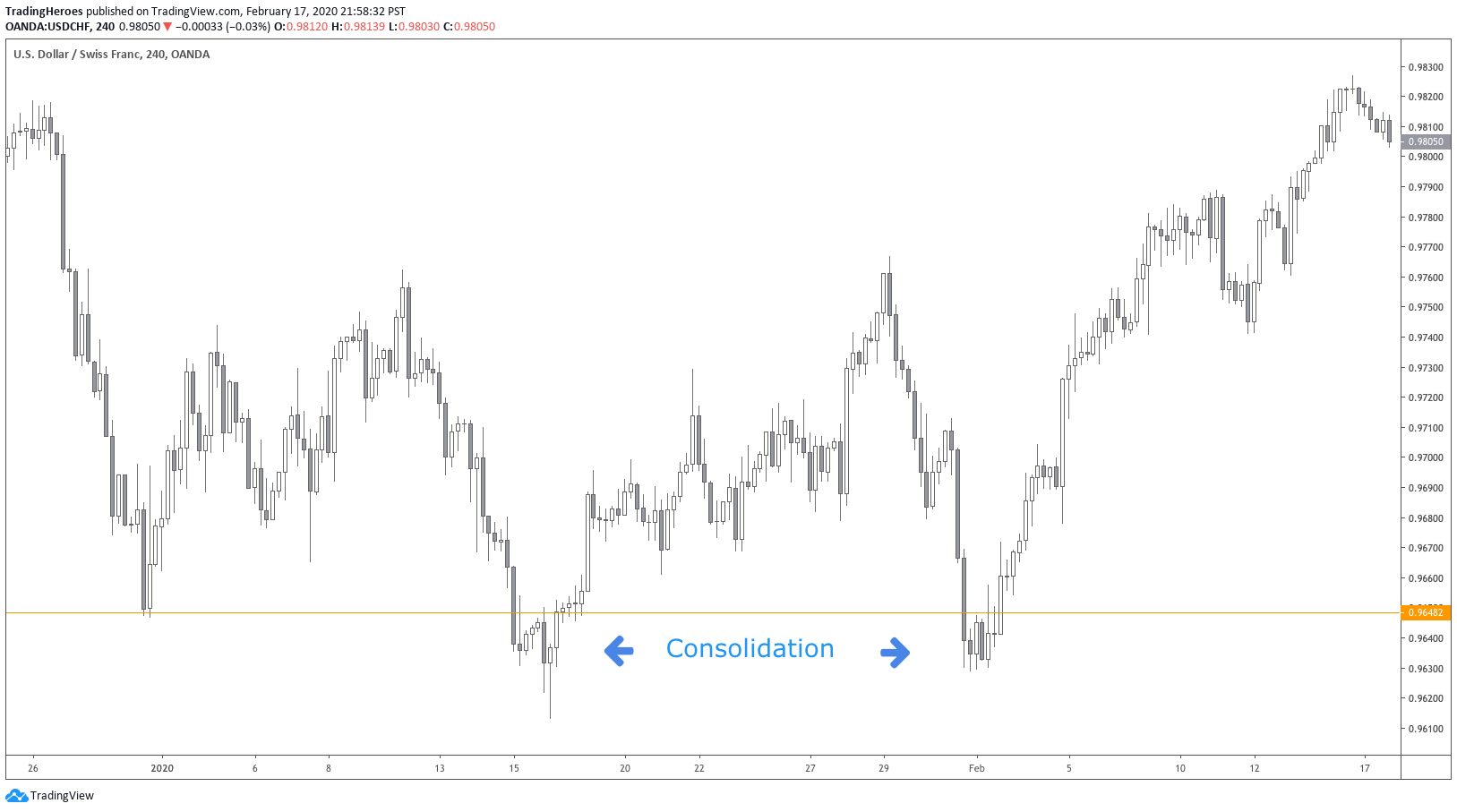 Don't Place Your Stop Too Tight

Retail traders tend to get greedy and with their stop losses. They dream about hitting 10R trades and get stopped out repeatedly.

Now, there are some trading strategies that are profitable with a very low win rate, and a super high return per trade. But most traders don't have the trading personality to stomach such a low win rate.

New retail traders love to place their stop losses at round numbers (00) and half numbers (50). Those levels can act as support and resistance.

So whenever possible, set your stop on the other side of those levels.

Now let's take a look at some of the advice that is out there in internet land about avoiding stop outs and I'll show you why it doesn't make sense.

Some educators will teach that a support or resistance level is more reliable if it's touched multiple times, on the same side. 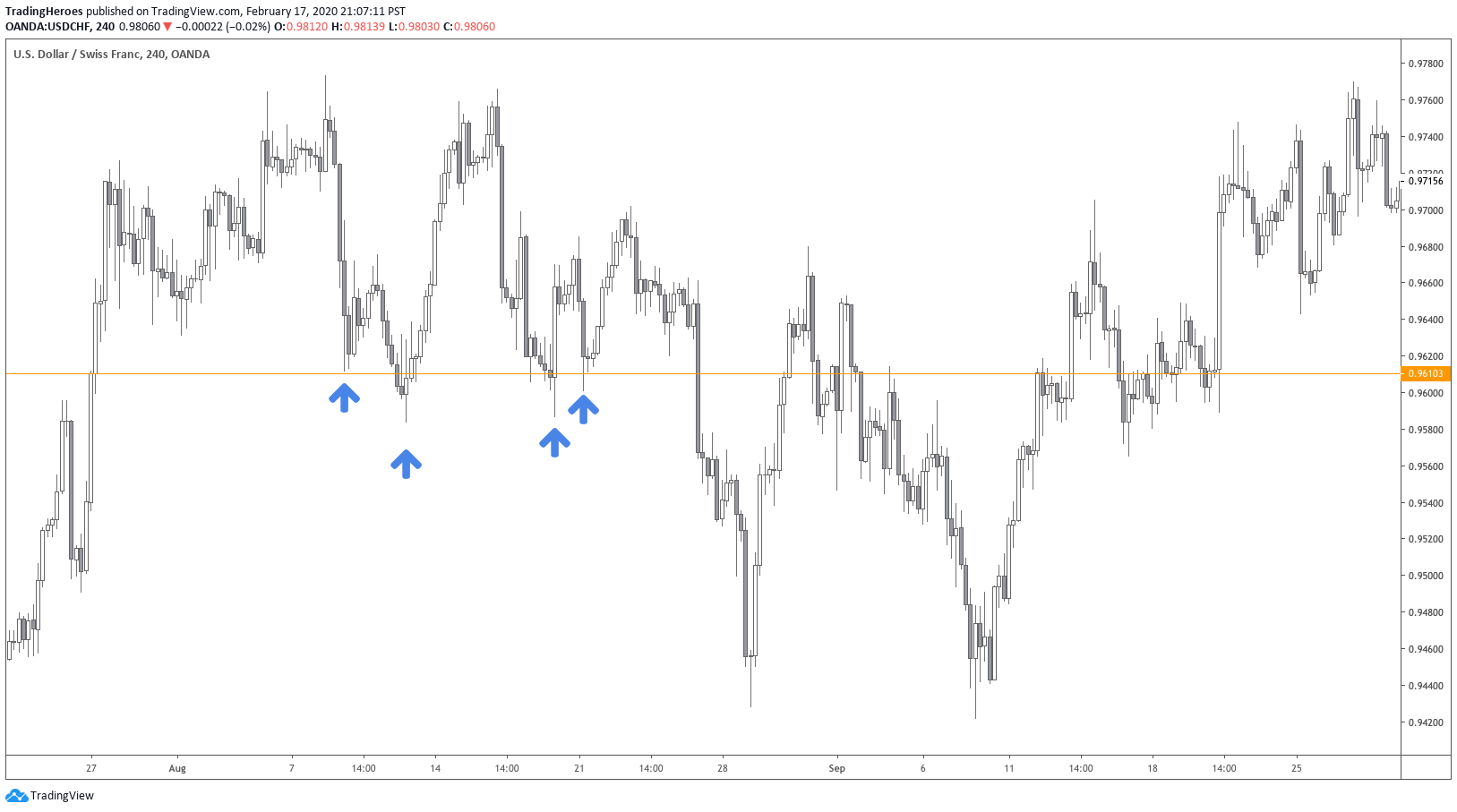 In reality, when price action hits a level multiple times, it's actually more likely that price will break through it.

Even in the example above, only the second touch from the left turned out to be a really good trade. The other trades might have been profitable, but they were not nearly as good.

So don't believe that an obvious level will continue to hold.

It's a prime candidate for a stop run or reversal.

It can be tempting to draw a line on a chart and feel like price must respect that level.

But the reality is that levels are fuzzy zones. 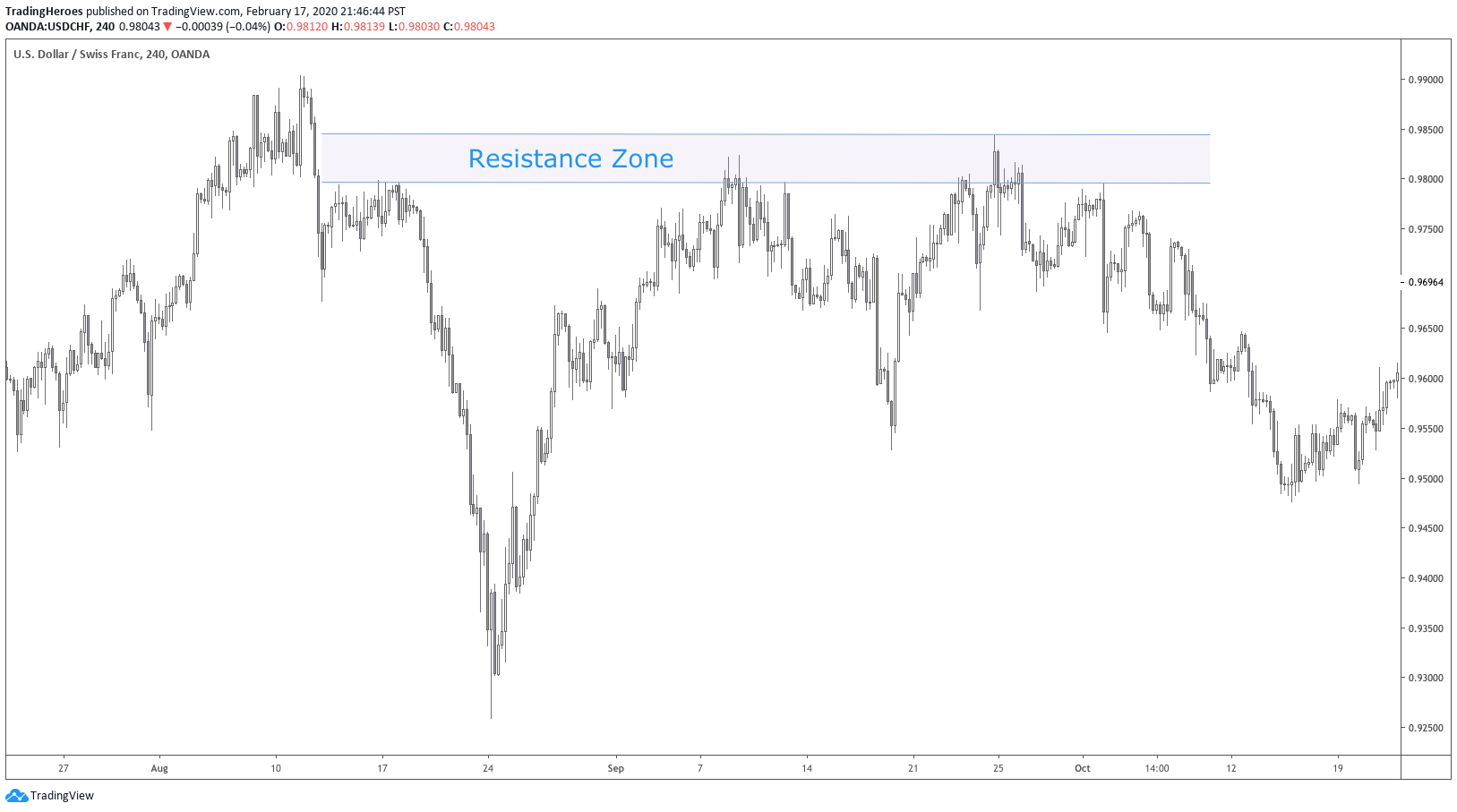 …and if price ever gets to that level, you will be sure that you were totally wrong about the trade.

Trading software that hides your stop losses can be useful in some situations, like when you don't want other traders to copy your trades.

But it won't help, in this case.

If you place your stop loss at an obvious level, or set it too tight, then you will still get stopped out a lot.

But using this type of software can be a good exercise for traders who are convinced that their broker is running their stops. When you hide your stops from your broker and they still get triggered a lot, then it's on you…not your broker.

It's going to be taken out either way.

A mental stop loss could even be worse because there can be a tendency not to honor the stop, or you could be away from the computer when the stop loss is hit.

So don't think that a mental stop will improve your performance.

It's more likely to make your results worse.

A reputable and regulated broker won't run your stops. It's not in their best interest.

But if you are getting stopped out a lot, then there are other factors that could be causing this. Take some time to review your trading journal and find out what's really going on.

Let us know if you have any questions about brokers and stop losses, in the comments below.