Learn how to spot a Batman chart pattern and what it can tell you about where the market is going next.

There's a rare price action formation called the “Batman” chart pattern. This is not to be confused with the bat pattern, which is a harmonic chart pattern. Not many websites talk about the Batman, so let's take a trip into the cave where this this mysterious chart pattern lives, and find out what it's all about.

It's called a Batman because it looks like the top of Batman's cowl. These patterns are easy to spot because of the characteristic “ears” and price consolidation between them. 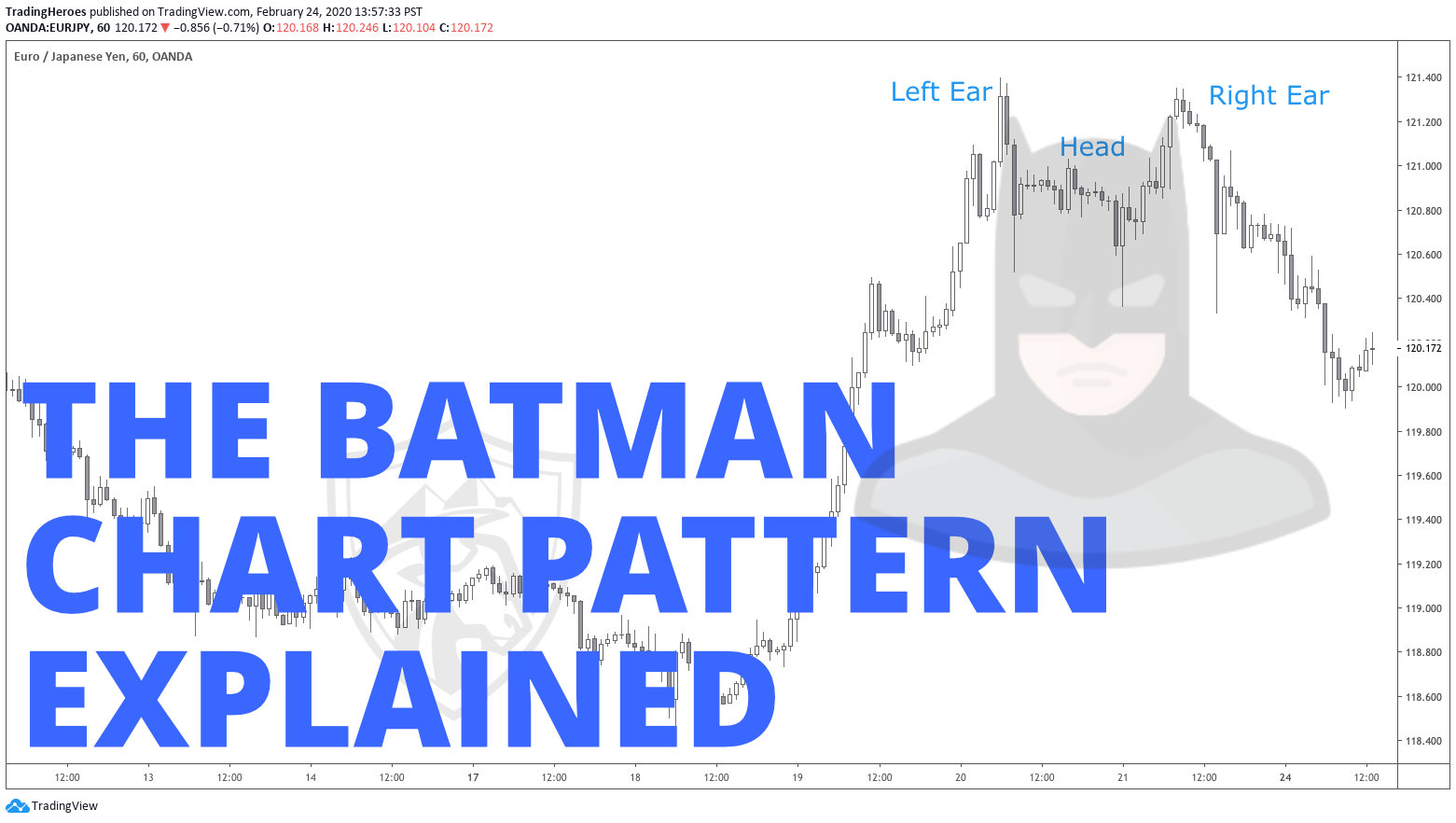 But that's not all that you should be looking for.

Let's get into a more detailed description of what to look for in a Batman and how it can be traded.

The “Batman” is basically a variation of the double top/bottom reversal pattern. Here's what you are looking for:

This is an example of a bearish Batman. We would expect price to drop after the second failed spike and we would look for an opportunity to go short. 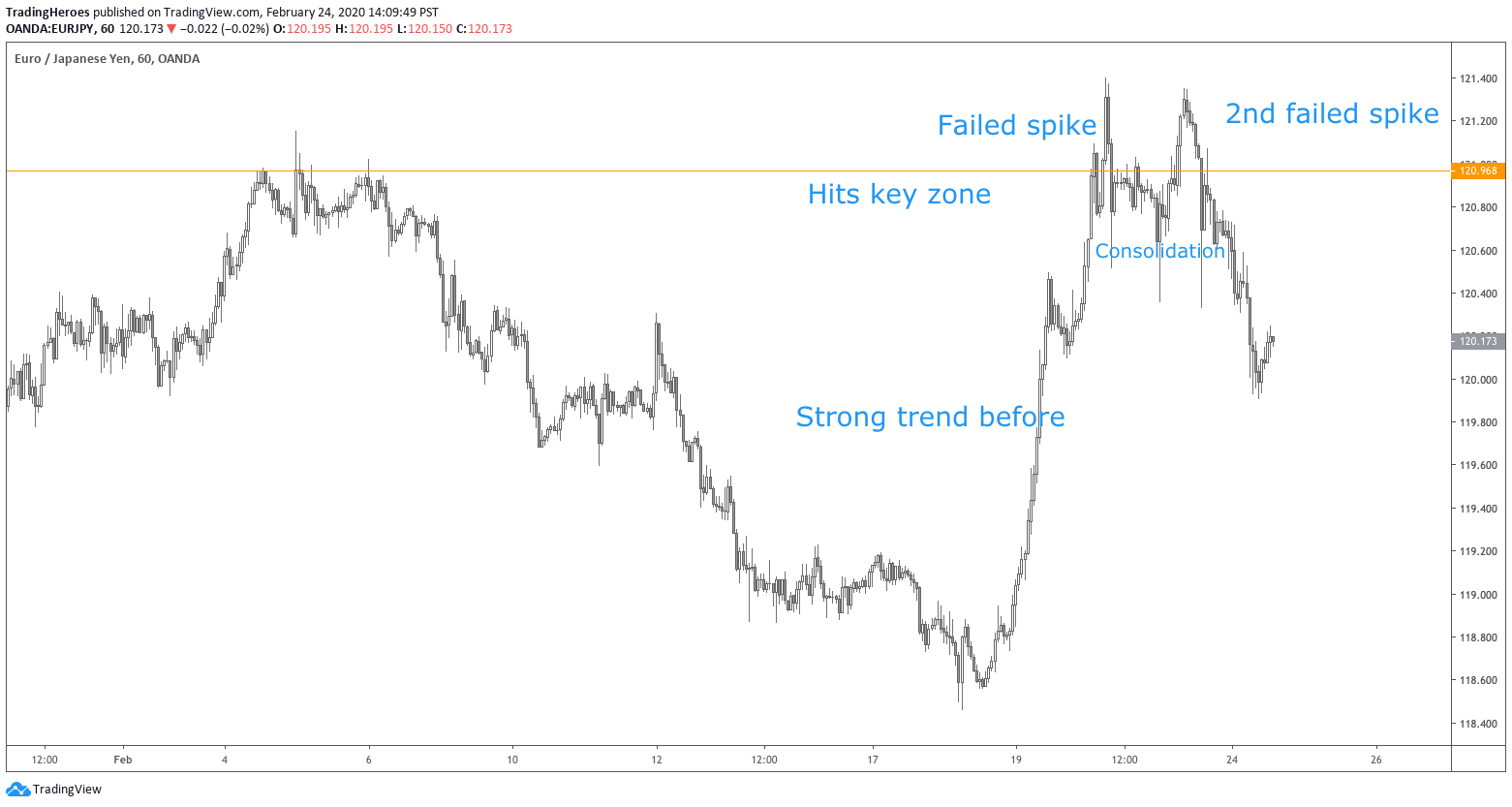 The important thing to look at is where this pattern prints on the chart. Just like any other countertrend chart pattern, this one has a much higher probability of success if it prints on a key support or resistance zone.

This is an example of a bullish Batman. It's just the opposite of the the example above, but the principles are the same.

Again, we see the big spike into the support level, followed by consolidation. Then another push lower that's rejected, and price heads higher.

The Psychology Behind a Batman

Like any other chart pattern, you shouldn't look at the pattern in isolation.

Take a few minutes to understand the market backstory, psychology behind the pattern and what it's telling you about the market.

When you understand what traders are doing behind the scenes, it's easier for you to identify a high quality setup.

The first part of a Batman is a strong trend. Obviously, this isn't close to being a Batman yet, but it's an important precursor.

When the market moves swiftly like this, it's also more likely to move quickly through this area of the chart, in the opposite direction. There's no guarantee that it will move through this part of the chart again.

But if it does, it will probably move rapidly. That means quick profits.

…and that's good for a Batman trade.

Next, price approaches a strong zone.

This is when it's time to pay attention.

Remember that this has to be a significant zone. The more times price has touched this zone and decisively rejected it, the better.

Take a minute to look at the history of the chart and see how significant this level has been. If it hasn't been that significant, then this probably isn't a good opportunity.

Now we wait to see what happens. There could be several reversal patterns that could happen here, including a Batman.

Bulls try to push the price higher, but fail the first time. You'll notice a strong rejection at this point.

The bulls gear up to make another push and this is where price consolidates. There's a lot of buying and selling here as the bulls and bears battle it out for what the next big move will be.

Finally the bulls give it another try, and fail again. This forms the right ear and is another sharp price rejection of the key zone.

That's when there's an opportunity to possibly take a trade because there's a good chance that price will start to move away from the support or resistance zone. In this case, it's a resistance zone.

Of course, it doesn't always work out as nicely as this, but here's what this opportunity ended up looking like.

Where to Enter a Trade

There are three places that you can potentially enter a Batman. Stick around because I'll show you how to test this for yourself.

This is most aggressive entry, and potentially the most profitable…but also the most risky. It's riskier because you have less confirmation that price will reverse.

For this entry, you are going to try to enter as close to the top of the right ear as possible. The idea is to enter when you are reasonably confident that the level is going to be rejected, but not too late that you miss out on a majority of the profits.

In our example trade, this might be a good place to go short. 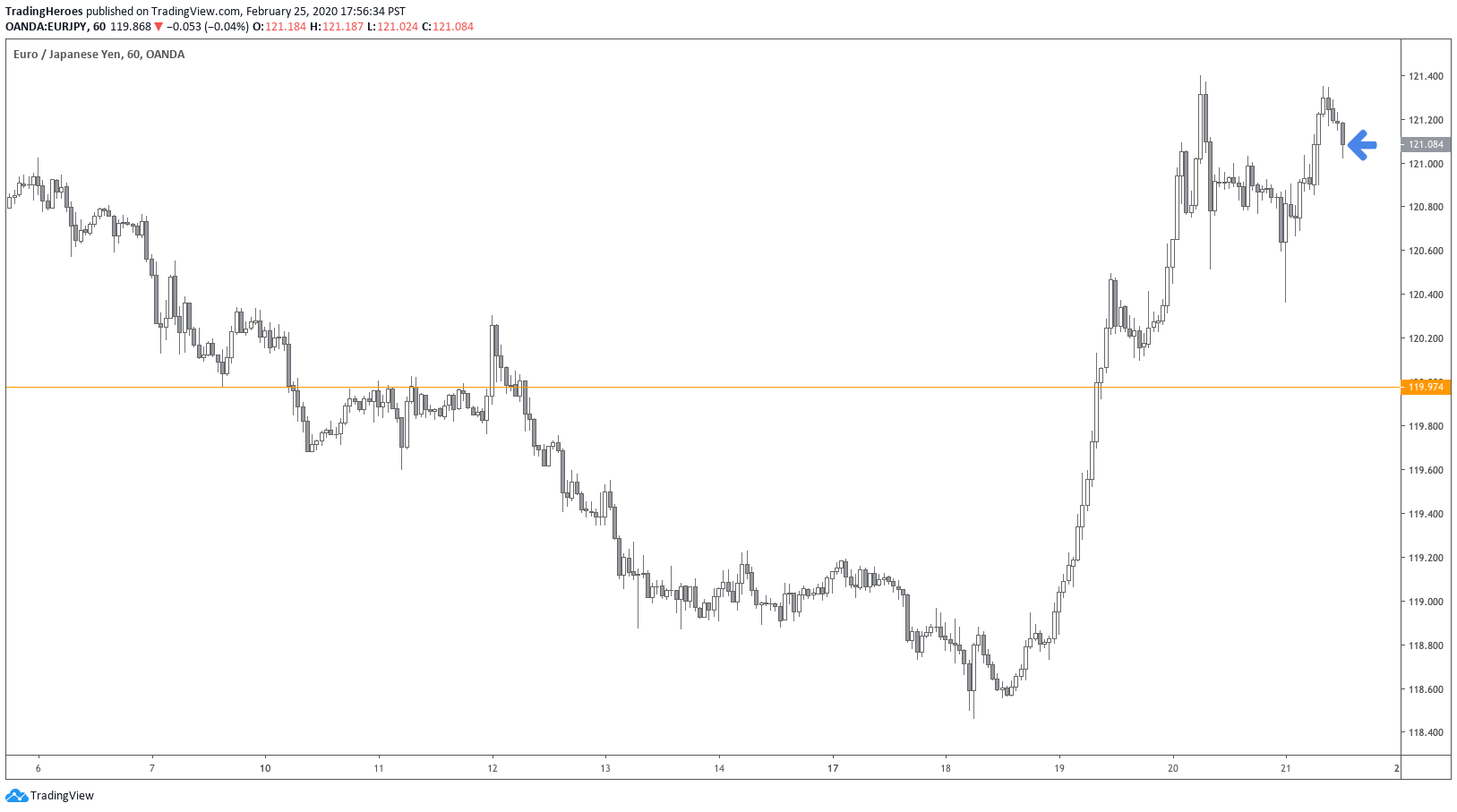 The next place that you can enter is when price closes below the forehead.

This is a level that's drawn at the support zone.

It also helps if there was a test of the level from the bottom, as you see to the left of this chart. When you see touches of the zone from both sides, that helps to confirm that it's an important level.

When a Batman Fails

Just like any other chart pattern, this one will not work out 100% of the time. This pattern will usually fail at the forehead or the right ear of the pattern.

Here are the points on the example chart. These are the areas on the chart that price is most likely to continue upwards, in this example. It would be the opposite for a bullish Batman. 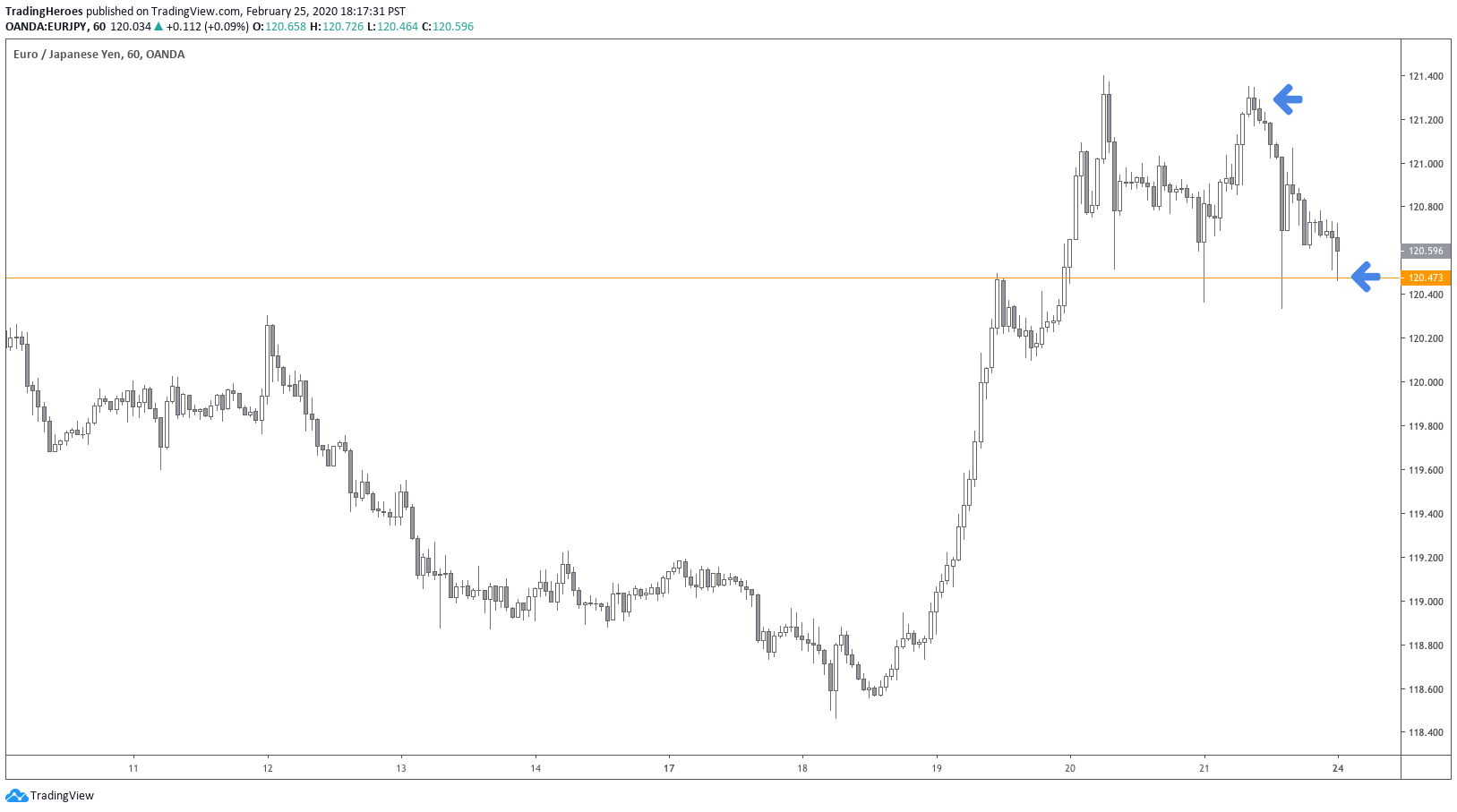 Is There a Difference Between a Bearish Batman and a Bullish Batman Pattern?

There isn't a difference between a bearish and bullish Batman. The pattern appears at both market tops and bottoms.

So keep an eye out for this pattern on the timeframe that you currently trade.

But be sure to test the pattern before you start risking real money on it.

Is the Batman a Type of Head and Shoulders?

No, the Batman is more like a double top.

Even though we are using Batman's head to describe a chart pattern, this is not a head and shoulders (H/S) formation.

A H/S has three pushes into a zone. The middle push is the strongest, with the other two being weaker…looking like shoulders.

The concept behind them is similar. You are looking for a failed push into a key level.

But the way that this plays out on a chart is different.

Is the Batman a Type of Harmonic Pattern?

There's a type of harmonic chart formation called the bat pattern. Harmonic patterns also include the Gartley, crab and butterfly.

They use Fibonacci retracement levels to predict price movement, and are way too complex to get into in this article.

If you want to learn more about them, you can check them out here.

The bat pattern looks nothing like the Batman pattern.

I'll have more about harmonic patterns in future posts, but for the purposes of this post, it's enough to say that harmonic bat patterns are totally different from Batman patterns.

Does it Really Work?

Alright, now this is all great in theory, but does this chart pattern actually work?

Does it give you a quantifiable edge in the markets?

That's what we will take a look at in the next Batman chart pattern blog post. I'll do some backtesting and show you the results.

If you want to check to see when my results are posted, click here to read all posts associated with this chart pattern.

In the meantime, feel free to start testing it yourself. You can get started with this tutorial.

Remember…never, ever assume that a trading strategy you read in a blog post will work. Always test it for yourself. This includes trading strategies that you read about on this blog.

The strategy may not have an advantage, or it may not be a good match for your personality.

Test it for yourself before risking real money.

Stay tuned for the results…

- Rumi
Financial freedom is probably closer than you think. Stop paying for things that don’t make you truly happy.