There are currently only 2 cryptocurrencies that are truly private. Learn which ones they are and why they are private.

I originally wrote a post called: 7 Top Privacy Cryptocurrencies. But as I started doing more research, I realized that most of the coins on that list were not really private. So I deleted that post and wrote this update.

In reality, there are only 2 privacy coins worth looking at, in my opinion. The top privacy coins at the moment are Monero and Pirate Chain.

But before I get into why, let's take a look at what the best anonymous cryptocurrencies have in common.

The Characteristics of the Best Private Cryptocurrencies 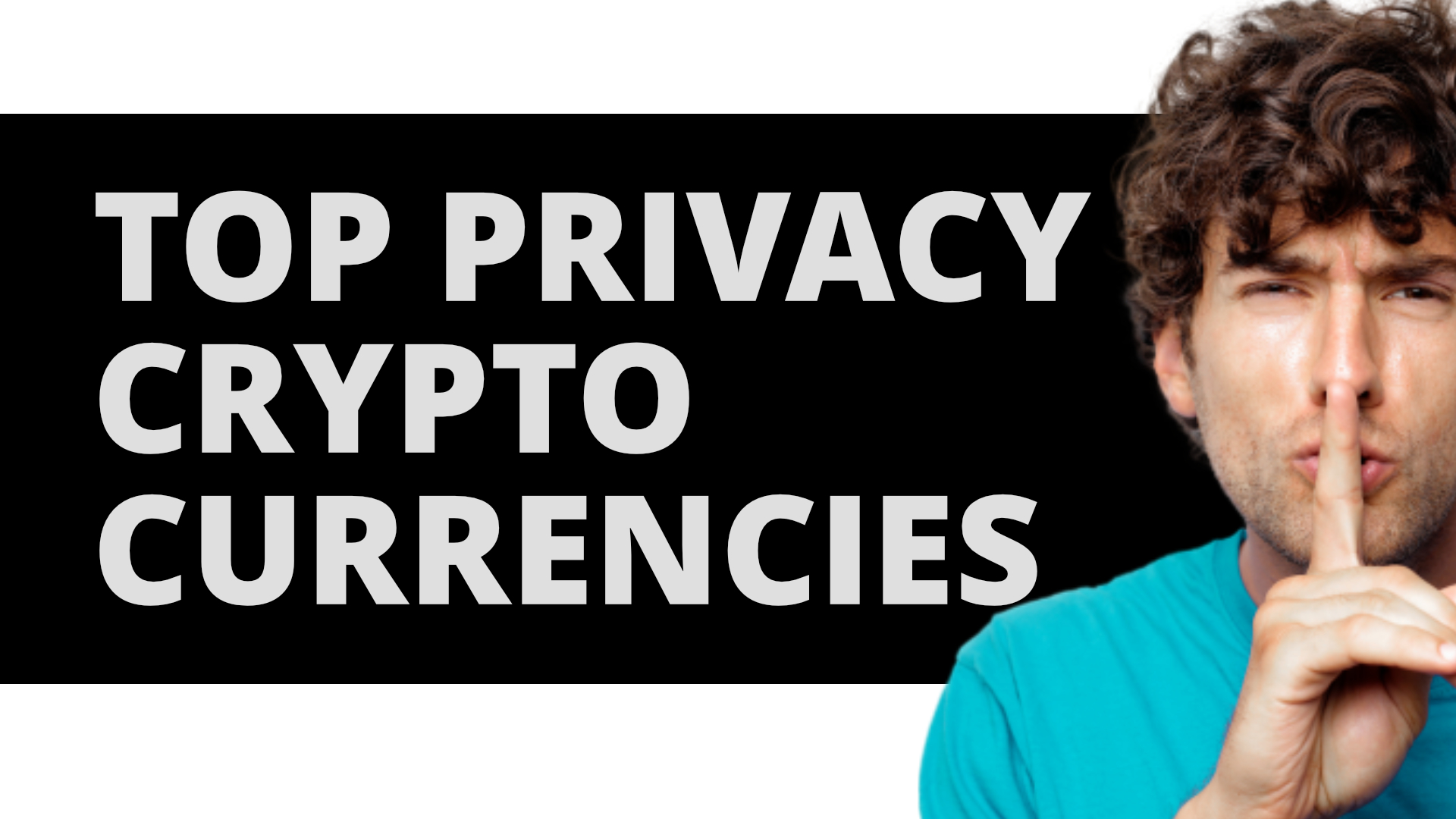 I could get into every little detail of how privacy technology works and the elements of a good project, but that would be a 500 page blog post and you would probably fall asleep before you got any useful information out of it.

So I'll boil it down to the basics and give you only what matters most.

Every Transaction Must be Private

The first characteristic of a true privacy coin is that all transactions are private by default.

Most people are lazy and won't use the private wallet or check that box. Even worse, some third-party wallets don't even give you the option of sending a private transaction, even if the cryptocurrency has that capability.

Because of these two issues, most transactions on these blockchains get transmitted publicly and are just as transparent as Bitcoin and Ethereum.

The second important characteristic of a privacy coin is the culture of the community involved with the cryptocurrency.

It's generally best to steer clear of projects that don't provide regular updates on their progress. Putting money into these projects is like throwing your money into a deep, dark hole.

You never know if you will get it back again.

Next, the way that the technology keeps transactions private has to make sense. If you aren't too technically inclined, then ask people to explain it to you.

Someone should be able to explain the technology in a way that you can understand. However, if you ask several people and they cannot describe the tech to you in plain English, then it might not be as good as the creators say it is.

There are a lot of projects out there that tell you all the amazing things that their cryptocurrency is supposed to do. But most projects don't even come close to delivering.

Even if you are convinced by the technology, it helps to try out a few transactions for yourself. How easy is it to use? Is it something that people will find useful?

Finally, take a look at how many people are participating in the network. The way to measure this will vary by cryptocurrency.

For Proof of Work (PoW) cryptocurrencies like Bitcoin and Litecoin, look at the number of miners and the hashpower on the network.

Hashpower is simply the amount of computer power that is being used to verify transactions. The higher the hashrate, the more popular, and secure the network is.

If you're looking at a Proof of Stake (PoS) cryptocurrency, then look at how many wallets are staking and the total amount of cryptocurrency being staked.

These are all important questions to ask yourself, when considering which privacy coins to trust.

There are obviously many more details to take into account, but those are the most important ones.

Now that you understand what to look for, let's take a look at the top 2 cryptocurrencies that focus on privacy. 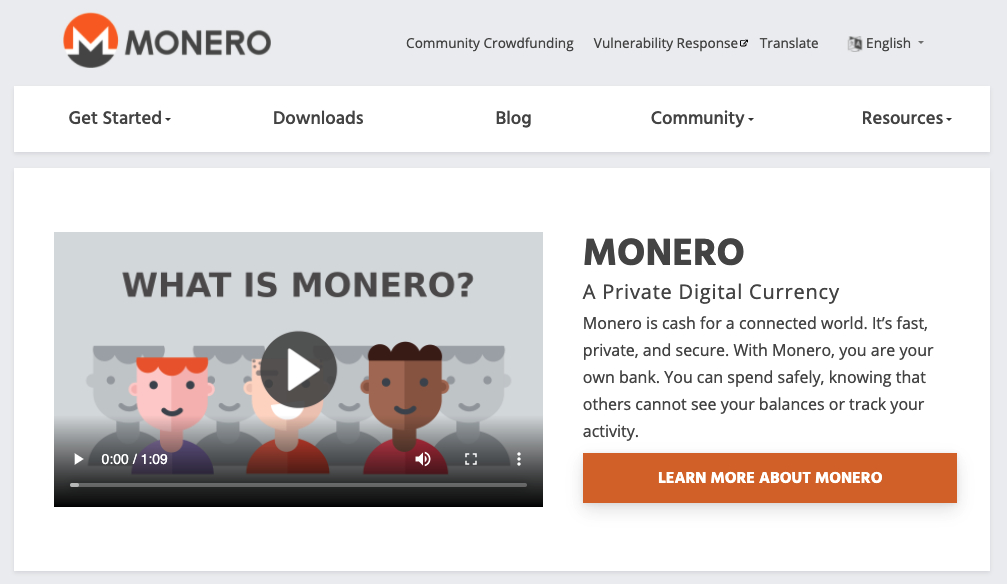 This is one of the OG privacy coins. A lot of so-called “privacy” coins have come and gone over the years, but Monero is still going strong.

There are many privacy coins that claim to be the most private cryptocurrencies, but there are very few that can live up to that claim. Monero is one of the coins that has true privacy protection.

Since Monero is a proof of work (PoW) cryptocurrency, we are going to look at how many miners there are in mining pools, and the collective hashrate of the participants.

Let's look at Bitcoin first. Bitcoin is the undisputed leader in network participation and is the most secure cryptocurrency network, by far.

In this screenshot, Bitcoin has a hashrate of 165.63 EH/s. A hash is essentially a mathematical calculation. These calculations verify transactions on the blockchain.

If you aren't familiar with hashrates, here's a breakdown of how they are measured:

So the Bitcoin network has a collective computational power of 165.63 Exahash per second. 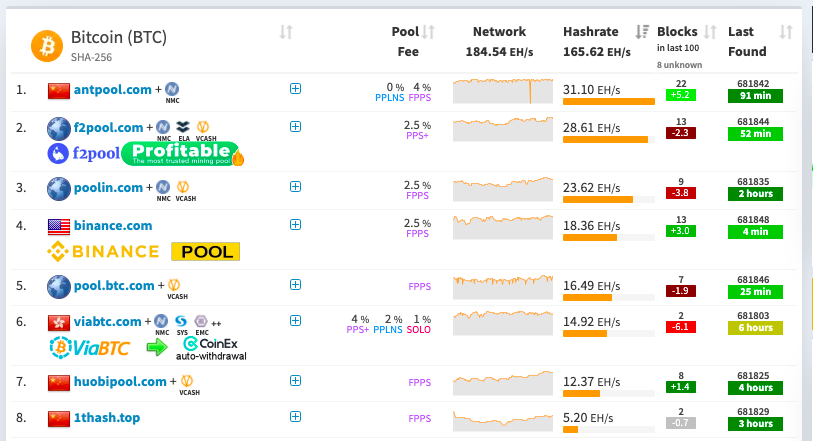 In comparison, Monero only has a 2.1 Gigahash network. nothing to laugh at, but significantly less than Bitcoin.

There are several well-established cryptocurrency wallets that support Monero. The top ones are Cake Wallet and Edge, but there are others.

You can find all of the currently recommended wallets for Monero here.

Being supported in major wallets is a huge boost for a cryptocurrency because it makes it more likely that people will use that currency for everyday transactions.

Monero is listed on a lot of exchanges, including several major ones. You can see their current list here.

To purchase Monero, you'll have to buy Bitcoin or Litecoin, then send it to an exchange that trades XMR. Exchange the Litecoin for Bitcoin, or just trade the Bitcoin directly for XMR.

I've made arrangements so you can get started with $10 in free Bitcoin, click the link to get the details.

The biggest benefit of Monero is its first mover advantage. It was launched in 2014 and is currently the most popular privacy coin.

On top of that, it has a passionate community and the core developers are continually working to make it better.

In spite of its popularity, widespread adoption and proven tech, there are 2 big potential issues with Monero.

First, RingCT privacy technology has worked well enough until now, but it could be vulnerable to blockchain analysis in the future.

Monero is working on upgrading their privacy technology, so this shouldn't be an issue after the changes are implemented.

Second, the supply of Monero is infinite. The reason that cryptocurrencies like Bitcoin have become a good store of value is because there's a limited supply.

But cryptocurrencies like Monero have chosen to go another route by allowing the supply the be infinite. There is a cap on how many XMR can be mined per day, but there's no limit to how many can be created.

According to the Monero team, they did this because they want to reward the miners for verifying transactions. Miners only mine because there's financial incentive to do so and this should keep miners happy in the future.

The downside of this is that XMR is inflationary and could suffer from some of the same issues that we see with fiat currencies.

Pirate Chain claims that it's the most anonymous cryptocurrency in the world. It's a fairly new project that was launched in 2018.

The Pirate crew wanted to solve the issues that they saw with Bitcoin and Monero, namely:

It borrows its technology primarily from Zcash and Komodo. Zcash uses zk-snarks technology to make transactions private, which is currently the most anonymous protocol.

But Zcash suffers from one major flaw…all transactions are public by default.

As I mentioned before, all transactions on the network have to be private in order for you to have a completely private currency.

So Pirate Chain borrows the already amazing security of Zcash and takes it to the next level.

The hashrate in Pirate is measured in solutions per second, which you can think of as the same as hashes per second. It's not exactly the same, but it's close enough for the purposes of this post.

As you can see, there is one major mining pool and 2 very minor pools. So network participation is not high.

But these are still early days for Pirate, and this profile is typical of newer cryptocurrencies that have not been widely adopted yet.

The good news is that the collective hashrate is pretty close to Monero.

Unlike many new projects out there, Pirate has wallets for both mobile and desktop devices.

There are currently wallets for Android, Windows, macOS and Linux. They are working on a wallet for iOS and they recently launched a version for Linux ARM.

If you want to create paper wallets, they have those too.

They are good for burying your treasure.

Again, ARRR is a fairly new crypto, so they are working on getting listed on the big exchanges.

Being a privacy coin also makes it difficult because a lot of exchanges don't like to deal with the headache of the additional regulations that can come with with privacy coins.

But if they can get on the same exchanges as Monero, that will be a huge boost to their visibility and use.

The most successful cryptocurrencies are the ones that not only have the best technology, but also have the widest adoption.

To get some free ARRR, sign up for Coinbase, then trade for ARRR. Get the details at that link.

The biggest benefit is that Pirate appears to have the best privacy technology of any cryptocurrency available today. It also has wallet solutions that work and an active community that appears to be working hard to make the most private coin in the world.

Here's a graphic that compares the top privacy cryptocurrencies.

The obvious downside is that this is still a fairly young project. There are still minor issues with the wallets and there is a small concern with how Pirate was launched.

Some people will say that they have nothing to hide, when it comes to their financial transactions.

But even if you have nothing to hide, would you want to live in a glass house where everyone can see everything you're doing from the outside?

The bottom line is that we should all have the option to disclose our personal information our not. As the world becomes more surveillance oriented, privacy coins are one way to help us maintain our privacy.

There are different niches in cryptocurrency and privacy coins are one area that has a real-world use case, with legitimate solutions like Monero and Pirate Chain.

However, technology is constantly changing, so coins that are private now, might not be private in the future.

Bitcoin is a good example.

When Bitcoin first became popular, fans bragged about its privacy. However, blockchain analytics came along and has made it possible to connect identities to specific Bitcoin wallet addresses.

The companies that do this type of analytics have gotten quite good at this.

So there is the possibility that these 2 cryptocurrencies may not be private in the future. That's why it's important to stay on top of these projects and find out how they are coming along.

But if you value privacy, these coins are the ones to research right now. As always, do your own research and find out if they make sense for you.

They aren't for everyone.

- Rumi
Don’t be satisfied with stories, how things have gone with others. Unfold your own myth.