Trading systems do not have to be complex to work well. Even a very simple Forex trading system can be profitable. But how do you know? This post will show you how to take an idea and backtest it.

A few months ago, I wrote about why even simple trading systems do not end up actually being that that simple. This is mostly due to the fact that they need to be tested, retested and continually evaluated.

But let's forget semantics for a minute and take a detailed look at a system that has no indicators and very defined entry, exit and stop loss points. By most people's accounts, this is probably the definition of a simple Forex trading system.

What I Will Show You

In this post, I will tell you how I got the idea for the strategy to test and the exact parameters for my testing. I will also allow you to download the spreadsheet with all of my backtesting results, so you can follow along at home, if you so desire.

What I'm going to show you is the first two steps in the Strategy Development Framework and I hope that it will get you excited enough to come up with some ideas of your own to go test out and have fun with.

…and before I get started, remember that backtesting does have its limitations.

The first step in the Strategy Development Framework is the idea. Not rocket science, but it can be a daunting task, given all of the possibilities out there.

Yeah…if you read the Forex forums, there is no shortage of Lamborghini manifesting, private island buying, lingerie model dating, trading ideas in the world.

RELATED: Get RSI alerts for MT4, never miss another trade

Of course, the trick is to figure out which ones actually do what they say and which ones are a Titanic-sized crock of shit. Obviously, you won't really know which ones are legit until you test them out, but there are a couple of different ways that you can go about finding an idea to start you off.

First, you can just pick any random ass system that looks good to you. This may seem like a terrible idea, but it can have it's pluses. On the bright side, you will probably figure out something that doesn't work. But you may also get other ideas on how you can get the method to work and that may lead you to something that actually does work.

The second (and preferable method) is to find someone who actually knows what the hell they are talking about and test what they are recommending.

In my case, I got the idea from two sources. In my interview with Walter Peters, he talked about one of his breakthrough moments coming when he tested a simple Kangaroo Tail method on the daily chart that made about a 80% return. In case you are wondering, Kangaroo Tails are just another name for Yo Yo's, Unicorn Horns and Pin Bars.

In addition, after purchasing the Chris Lori AUDJPY Trading Course, one of the many things that I learned was to only trade that pair long. That is just Chris' opinion of course, but I found that to be a good idea (more on that in the Backtesting Results section). I also talked about it a little in a November post that you can read here.

Anyway…so I combined the two and decided to test Pin Bars, trading long only.

But that's not all…

Defining the Idea For Testing

Before we move on to the second step on the Strategy Development Framework, which is Backtesting, we have to define our idea so we don't go changing shit in the middle of testing.  That is actually very easy to do and will not give us an accurate picture of how our system might perform.

We also don't want people to think that you are a crazy person when you tell them that you have a trading system that is profitable.

So I broke out my handy-dandy Strategy Template and wrote down the parameters to my system.

Here is how I filled out the Template:

Here is a picture of what a typical setup would look like: 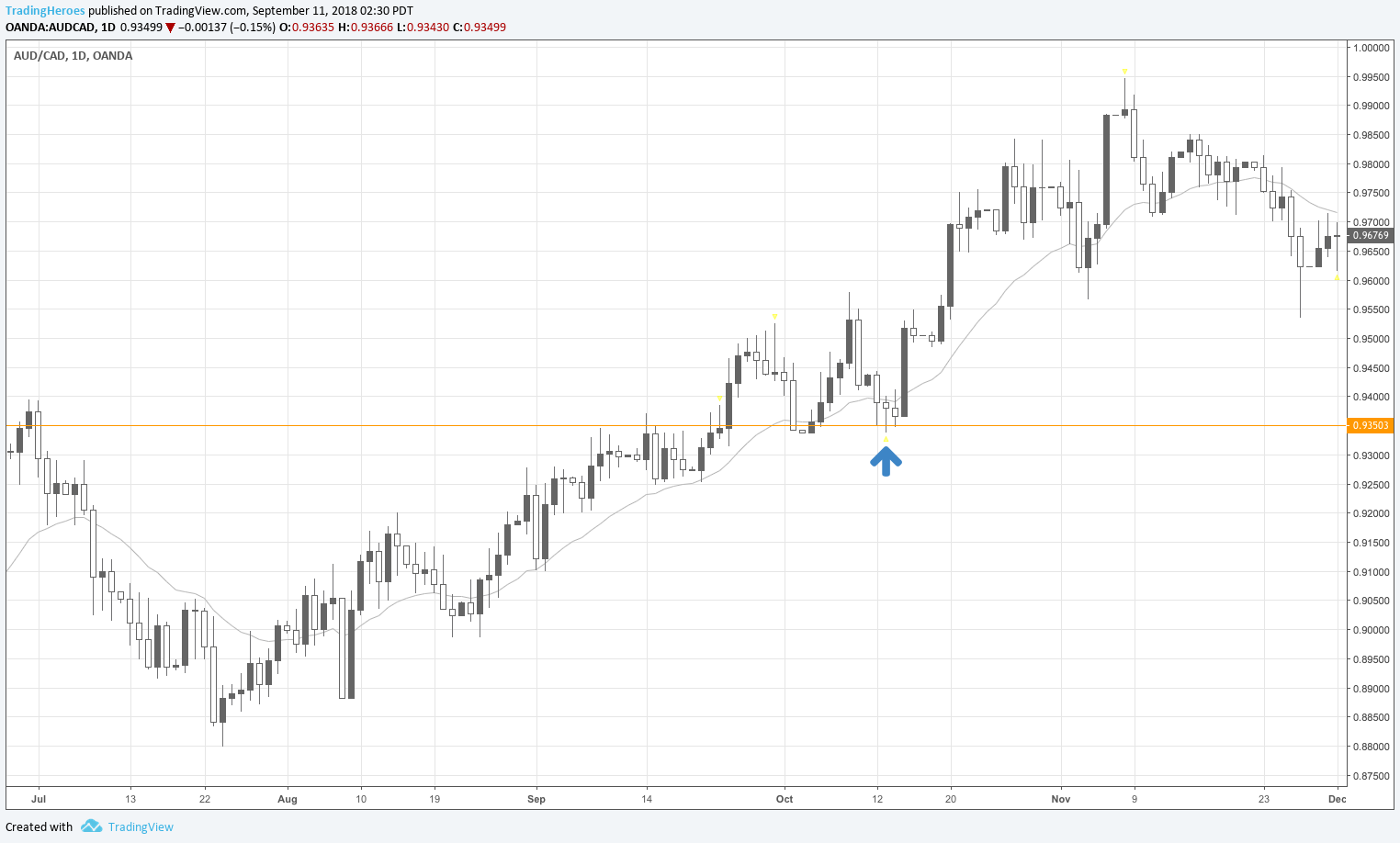 Before we go any further…a couple of notes on this Idea. This was all done Backtesting, so no real money was risked. Also, risking 2% is considered risky (at least for me), but I just wanted to see how it would turn out.

And of course, past performance does not equal future results.

OK, moving on to…

Here is what the final results looked like from testing it on the Daily chart from January 2001 to September 2012.

All testing was done on Forex Tester.

If you would like to see all of the results, you can download the zip file with all my trades here. Note that there are only trades until June 2012, but that is only because there were no more trades after that.

As I mentioned above, I did test this trading strategy both long and short on this pair and the results where not nearly as good. Therefore, I decided to go long only…just for this pair.

As you can see, it was a pretty decent result. 161.81% over 11 years isn't fantastic, but it does show that this super simple method could work. My primary concern at this point is the drawdown amount, since this test risked 2% on every trade. Unfortunately, Forex Tester sometimes drops the ball on drawdown, as it did in this case, showing a big fat zero.

I'll have to run it through Excel to manually to figure out the drawdown.

There are other ways that this system could be tweaked to try to improve the performance. Just a few thoughts off the top of my head…

I could go on for awhile on what I could do. But I just wanted to give you some ideas on how to test a very simple trading strategy and I hope that you will be inspired to test this method or another system that you have been thinking about.

If you tried testing this strategy, what where your results? If not, what can you test right now that might move you forward? It doesn't have to be perfect, just define it and test it. I would love to hear your results in the comments below…

You only need 1 really good trading strategy. Focus.
Financial freedom is probably closer than you think. Stop paying for things that don’t make you truly happy.