I admit it, I lost 1,095 pips on one trade. Get the details of the trade and why I don't really care. It was just another day at the office.

Back on May 22nd, I lost precisely 1,095 pips on one trade.  When I first started trading, that was a ridiculous number of pips to lose on a single trade.  The courses that I went through at the time recommended that you keep your stop as tight as possible, usually 20-30 pips at most.

But as you will see in this post, not all pips are created equal.  If you are still concentrating on pips, you are barking up the wrong tree.  Here is what I mean…

The trade in question is the AUDJPY trade that I blogged about back on April 25th.  In this trade, I used the long only Pin Bar setup on the daily chart to enter the trade long.

At one point, all of the positions were profitable, but I was looking for price to retest the highs, as the strategy I tested suggested.  I followed the rules of the system and I could have exited earlier, but overall it was a good trade.  I followed the system and it didn't work out…that's trading.  If we never lost, we wouldn't call it trading, we would call it…duh, winning.

So here is how the trade looked in my Twitter stream.  Every time I close a trade, MyFxBook automatically sends out a tweet with my results. If you want to learn how to do this with your trades, check out this post.  It's really easy to do and it is totally free.

Looks downright catastrophic, right?  How can I afford to lose that many pips? However, in reality, this is really how it looked on my trading report.  The green bars represent the number of pips gained or lost.  As you can see, ever since I started trading #thebossfx, that is the most number of pips that I have lost on a trade. 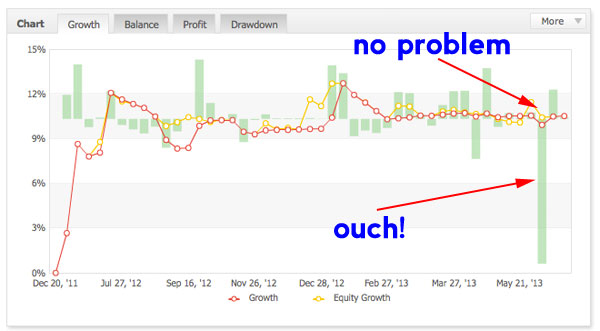 On a percentage basis however (the red graph line), it was just a minor blip.  That one trade only brought the account down by 0.63% or much less than 1%.  I've obviously lost more of the total account in the past, as you can see in about July 2012.

Trades Should Be Reported Differently (my opinion)

That brings me to the point that MyFxBook should give us the option of using % or $, gained or lost, in the tweets because as we can see here, using pips alone is pretty useless.  I could be making 5 pips a day and be killing it or as in this example, I could lose 1,000+ pips and be just fine.

Also, when trade results are reported this way, the pips can be greatly overstated.  For example, let's say that I open a 10,000 currency unit lot size trade in the EURUSD and close out 1,000 units at a time for an average of 10 pips each.  What I really did was close 10,000 units at +10 pips.  But the tweets will show 10 trades closed for a total gain of +100 pips because it will add up the +10 pip gains from each of the 10 exits.

In their defense however, reporting results on a percentage basis is tricky.  In order to report it this way, they would have to take into account deposits/withdrawals, open trades, etc.  Not the easiest thing to do and I don't know if there is really a good solution that would work.  But still, it would be nice to have and I strongly believe that the autotweeting is a great way to show people how your trading is really going.  🙂

So remember, not all pips are created equal.  Keeping your risk small can keep you out of trouble, regardless of how many pips you lose.  If you don't have an account that is big enough to trade micro lots (1,000 currency units each), then consider trading with a broker like Oanda that allows you to trade nano lots (1 currency unit).

I know that I sound like a commercial for them, but I do not make any money by saying that (I wish I did).  To have that option with a top tier broker like Oanda is amazing and you should take advantage of it.

This will allow you to keep your risk small, even with a tiny account.  If you are risking more than 2% on each trade, you should seriously look and tuning down your risk because you are probably more of a cowboy than John Wayne ever though he was.

How much do you risk on each trade?  Let us know in the comments below…