The fields of Artificial Intelligence (AI) and biodata are creating some exciting opportunities for both hedge funds and independent traders. 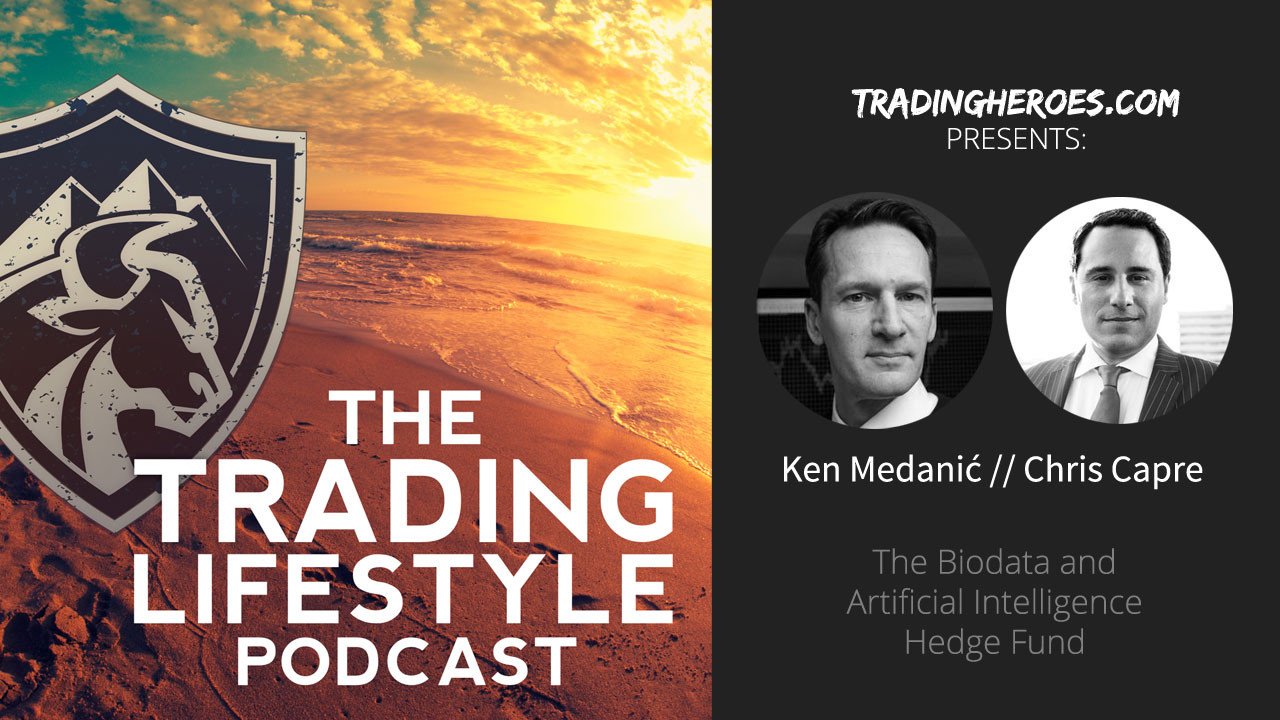 Update: My personal experience with this program and my full NeuroTrader review is provided at the end of this post.

High Frequency Trading (HFT) isn't the only technology that has changed the world of trading. Wearable devices that collect biodata have become smaller and more powerful, which has created some exciting opportunities for independent traders.

The first benefit is the ability to monitor your biodata in real-time, to see if you are in the right state of mind to trade. Successful traders are acutely aware of their trading psychology. But even the best traders can occasionally ignore how they are feeling and continue trading in a sub-optimal mental state.

With quantitative biodata however, traders can measure how they are feeling in real-time. Based on this information, they can either choose not to trade, or they can get themselves into the right state of mind before placing trades.

Secondly, the combination of biodata and Artificial Intelligence (AI) now makes it easier for this hedge fund to hire independent traders from anywhere in the world. This was very difficult in the past because of the extremely high degree of trust that a fund had to have in remote traders.

But this AI can monitor the biodata of remote traders and decide if a trade should be executed, based on a few simple biological indicators. You can think of it as a virtual Risk Manager that can manage risk before trades are even placed.

To learn more about how this works, listen in as I talk to Ken and Chris and find out how they developed this idea, the technology behind their fund, the requirements for getting hired as a remote trader, and much more.

In this Episode with Chris Capre and Ken Medanic

Other Ways To Get The Trading Lifestyle Podcast

Thank you for joining us for this episode of the podcast. If you have any feedback on this episode, please be sure to leave a comment below.

If you know of a trader who would benefit from any of the information in this episode, feel free to share it with them. To get more, be sure to subscribe to the show on iTunes or YouTube. If you enjoyed this interview and want to hear more, a 5-star review is greatly appreciated!

As of this date, I have officially dropped out of the NeuroTrader Program.

Since I posted this interview, I feel that I have a responsibility to share my personal experience with the program.

Here's my complete review of the NeuroTrader program.

Before you read on, keep in mind that I've worked at the trading desk of a hedge fund, I've worked at several San Francisco startups, I develop software and I used to work in IT for many years. This gives me a lot of insights into how things work in trading, startups and tech.

There was one big positive thing that came out of this experience. As part of Ken's mentoring, he dug into my childhood to see if there was any trauma that could be affecting my trading.

I eventually found out that there was an event in my past that was the primary cause of my self-limiting beliefs, but it was not in my childhood. My own independent research led me to different ways of uncovering and resolving these other traumas, which resulted in the most profound experience of my life, so far.

Although he was totally off base about my childhood trauma, I do credit Ken for helping me to look at the causes of trauma.

In addition, I'm still very excited about how this technology could be applied to a hedge fund.

Now the downsides of my experience…

As I mentioned above, Ken was way off on attributing my self-limiting beliefs to childhood. In all fairness however, I believe that you can solve trading issues in some people by only addressing childhood trauma.

But what really surprised me was that he didn't give me any methods to try to resolve any of my childhood trauma that came up.

I've since discovered many ways to discover and treat true trauma and a couple of them have worked extremely well for myself and others I've talked to. You can read about them here.

One thing that really annoyed me when it came to mentoring, was his general disregard for the value of my time.

We were set to have mentoring meetings on my Wednesday morning at 1:00am. But he would schedule meetings on Tuesday or Wednesday, without checking with me. He just scheduled meetings according to what suited his schedule.

I wasn't able to connect to the servers and have my biodata collected for analysis.

Since I used to work in IT, I can figure anything out on a PC, if you point me in the right direction. I followed all of the instructions, did some independent Googling and asked for troubleshooting help from Ken.

But I never received any emails with regard to steps that I could take to fix the problem.

The only emails I received from Ken were emails with my username and password…continually. As if that was the only solution to my problem.

I could login to the server, so my username and password were fine. I could not connect my device to collect data. It annoyed me that he never paid attention to this fact.

In my past life as an IT consultant I learned how to troubleshoot computers and related devices. I know what I'm doing.

From several interactions with him, it seemed like he didn't actually understand how the tech worked.

He did on a high level, of course, but not when it came to the smaller details. That's fine if you are the CEO, and acting as such, but super scary if you are a one man operation (see next section).

The bottom line is that Ken was doing everything by himself.

At least as far as I could tell.

Every successful startup that I have worked at has outsourced the key lower level tasks quickly…especially customer support. That is the lifeblood of your business because if your customers don't know how to use your product, they won't give you any more money.

Same thing at hedge funds. The traders don't handle bookkeeping and inputting tickets. That's what the assistants are for. Would you invest your money with a fund that has only one head trader…and he is also the accountant, attorney, trading desk assistant and janitor?

But with Ken handling all of the tasks himself, support was sorely lacking. I believe that there should have at least been one customer service manager to help with payments and general questions, and one technical support manager to get people on-boarded with the devices and the platform.

I repeatedly emailed Ken for troubleshooting steps on how to get my device connected, but he would only talk to me at our scheduled mentoring times.

What would have happened if there were several multimillion dollar discrepancies during the course of normal trading in the NeuroTrader fund? I cringe at the prospect. When I worked at a hedge fund, I made a mistake when verifying a multimillion dollar trade once and went through a DK a couple of times. It's not fun and that shit needs to get resolved right away because once it's in the books, it's done.

I have zero confidence that NeuroTrader would have the bandwidth to handle these types of issues.

Another thing that bothered me was that I had asked multiple times to be billed for the entire NeuroTrader program on one invoice, but I was ignored. The reason I had asked for this is because my bank is especially risk sensitive when it comes to international payments, so you have to call them up to manually request clearance and the clearance only lasts 2 weeks.

So in order to streamline things, I felt that it would be easier for both sides to just get the payment taken care of in one shot. Then he wouldn't have to come chasing after me every time the automatic payment was declined. I was only able to get an invoice for the full amount on the fourth request…and I paid it at that time.

The NeuroTrader program, in its current form, would certainly benefit from dedicated support staff.

I personally felt that the formal course material was mostly fluff. There were some good points, but the lessons were mostly aspirational. They told you the ideal living conditions that you should be in to trade well, and they almost made you feel bad if you weren't in that situation.

At least that is how I felt…and I've been involved with trading education for many years.

In reality, most people who are starting out in trading don't live in these conditions, but they are working hard to get there…through trading. They don't need to be reminded of what they don't have.

One thing that made me really uneasy was that Ken pushed too many of his religious beliefs in the program. Personally, I don't care what people believe in that realm, as long as they aren't hurting anyone. But just don't try to push your beliefs on me because what I believe is true to me. The same goes for your beliefs and I respect that fact.

I feel that it would have been much more effective if he used his mentoring material as the formal course. There were actually a couple of good nuggets in the mentoring program, if they were packaged differently.

I stuck with the program for longer that I should have because I was genuinely curious to see the biodata.

After all, I was already paid up.

But on my last call with Ken (which was supposed to be a mentoring call) we spent all of the time trying to get TeamViewer to work, so he could troubleshoot my issue.

Then in the middle of it all, he said that he had to go meet someone for coffee. I've been waiting months to get my device connected and I allocated time to fix this at 1:00 am in the morning and I get passed up for coffee?

You have to be shitting me.

This fund is not ready for investors. It still has way too many bugs to work out.

However, I'm still excited about this type of technology because I feel that it has a lot of potential. Ken isn't the person to make it happen, at least in my experience.

Nobody understand everything. Double check your assumptions. Double check others.
Don’t be satisfied with stories, how things have gone with others. Unfold your own myth.